BMW has a variety of cars it doesn't take seriously but which are still popular. One example is the 4 Series Gran Coupe, devoid of an M model, yet loved by the Russians.
5 photos

The 4er GC is, in our opinion, the only cool liftback model BMW makes. For some reason, the 6 Series has a regular sedan trunk. And don't get us started on the Gran Turismo models.

The most potent version of the practical 4 Series model is the 440i with the same kind of 3-liter turbo as you'll get in the M140i. Also, there's a ballistic 435d diesel, but the range goes all the way down to the 418d with just 150 HP.

We can't say for sure what model this is, but it was probably bought cheaply at an online auction in America and shipped over to Russia for our favorite mechanic to fix. The repair is accompanied by a modded body kit of the M Performance variety. It's amazing what a few carbon skirts and spoilers will do to a car.

Anyway, the teardown of the Gran Coupe is as enjoying as anything. It's got frameless doors, so we get to see how BMW fitted those. Also, Arthur manages to beat out the bent rear fender without cutting it out. He uses welds to tug out the metal and paints it black to reveal the high sports.

By comparison to his other work, this one seems easy. The frame of the car is not affected by the crash. It's so straight that the auto-closing trunk mechanism works flawlessly. As a reminder, the first video we shared saw the mechanic making one 7 Series from two cut-up ones. So he could have easily fixed the doors, be new ones came with the car. A few scratches bumpers and some new doors wouldn't give us sleepless nights as BMW owners. 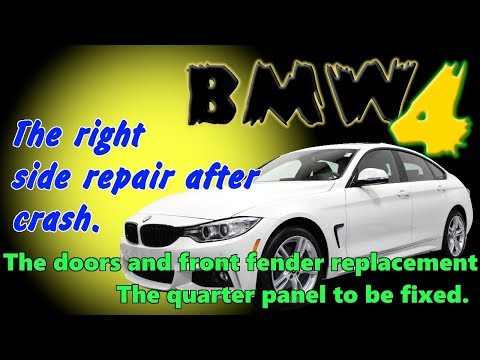