5 This Incredible Sailing Yacht Is Ready for This Year’s Thrash to the Onion Patch
Car video reviews:
Coverstory

Delivered in 2000 by Van der Graaf, the Eleonora E sailing yacht is a beautiful replica of a 1910 schooner. It is also the second-largest built by the Dutch shipyard. Unfortunately, the vessel got damaged today in Spain, sinking in Port Tarraco, Tarragona, where it was berthed.
6 photos

It happened early in the morning when it was accidentally hit by the 60 m (197 ft) supply vessel Punta Mayor. The supply ship was trying to exit the port but the main engines became blocked with the engine in reverse. Even though the captain tried his best to prevent the collision with the Eleonora sailboat by stopping the engines and anchoring the ship with the two anchors, his maneuver was insufficient.

As explained by the Port of Tarragona on its Twitter page, the sailing yacht was hit in the center of the hull, causing it to sink in no more than half an hour from the impact. No victims were reported from either ship.

Following the sink of the Eleonora E, containment barriers have been installed to prevent any other collisions in the area and any fuel spills. Port authorities also placed absorbent material to collect any possible fuel leaks from the sunk vessel. 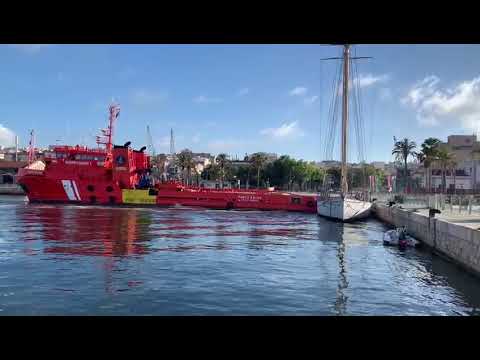