4 Audi SQ5 Is a Great SUV for Polo Players

The Auditography YouTube channel has opened our eyes to a whole new world of Audi fandom. It's filled with expensive cars and special locations, like these two R8's photographed at what's described as a billion dollar building.
4 photos

Unlike other European-style shopping malls in the area, Al Hazm caters only to the ultra-wealthy. We're talking about people so rich that an Audi R8 is peanuts. The complex has a classic Italian vibe about it and was built using 41,000 tons of the best marble and stone.

It's a testament to the Rajasthani stone-masonry and carving and its detailing. The features are meant to replicate the Galleria Vittorio Emanuele II, one of the world’s oldest shopping centers.

Al Hazm is mostly open-air and is open from 5 PM until midnight when the temperature to avoid the heat. Its name means “the natural hill” in the Qatari dialect, which is a reference to the location on a hill near Lejbailat signal.

A location like this will make most cars seem inadequate, but we have to talk about the Audis. The Mythos Black number is an R8 V10 plus with the V10 dialed up to 610 HP and 560 Nm of torque. quattro shoots it to 100 km/h in 2.9 seconds, according to Auditography's tests.

The Glacier White coupe is the newer and much rarer R8 V10 RWS, which sheds a few pounds by ditching the AWD. Only 540 HP and 540 Nm for this 1 of 999 special edition Audis. This is the cheapest way you can get behind the wheel of a new V10 supercar, so we can't help wanting one.

To be honest, besides the indoor rev battle, we don't love this video. A copy of a 19th-century building filled with cars that have digital dashboards and fuel injection? It's a bit like seeing a microwave at those fake rustic restaurants. 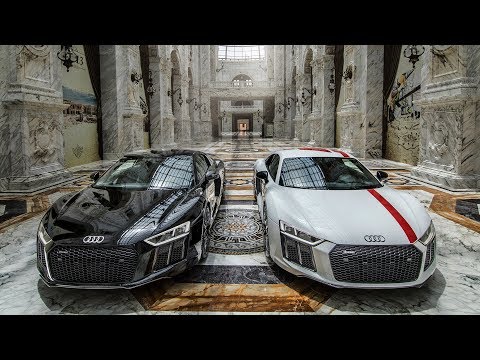