5 Spotify Finally Getting the CarPlay Interface Update Everybody Wanted
Car video reviews:
Up Next

Ghost Rider, but With a Twist: Pickup With Fiery Trailer Tears Through Town

While Tesla owners are still drooling after CarPlay support, Apple itself is silently working on its very own electric vehicle. People familiar with the matter claim the project is slowly but surely gaining pace and 2024 is likely to witness the official unveiling.
5 photos

In the meantime, the rumor mill brings us all kinds of speculation, with one particular rumor indicating Elon Musk wanted to sell Tesla to Apple, only that CEO Tim Cook said no from the very beginning.

A concept created by designer John Calkins envisions what CarPlay would have looked if Cook was actually interested in the purchase and Apple eventually took over Tesla.

More like a CarPlay on steroids, this envisioned version shows Apple’s car platform running on a 15-inch display similar to the one in the Tesla Model 3, obviously with a series of upgrades substantially refining the experience.

The interface obviously gets a major facelift thanks to the large screen, with CarPlay now also getting access to more than the infotainment and navigation features inside the car. It can also display info about the vehicle and let the driver control certain functions with the press of a button.

The dock, which is pretty limited right now on CarPlay, would display many more icons, turning the CarPlay interface into something that reminds of the traditional dock on the macOS desktop.

This is a neat concept, there’s no doubt about it, but at the end of the day, it’s something we’ll likely never see in real life, as a deal between Apple and Tesla can only happen when pigs fly.

Whether or not this looks similar to the version Apple wants to install in its upcoming Apple Car is something that remains to be seen. Expect Cupertino’s electric vehicle to come with top-notch infotainment capabilities anyway, and a large screen to provide access to everything would feel like home in such a setup. 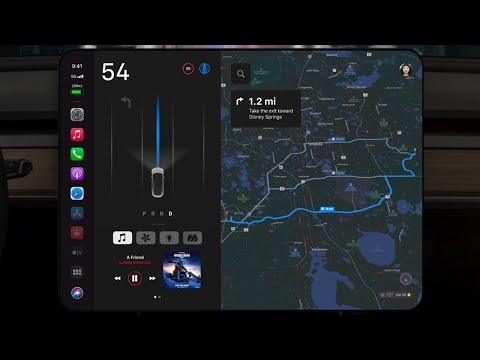