1 Candela's New Electric Boat Is Like a Ninja on the Water, Starts at Half a Million Dollars

The foiling technology used by the yachts that compete in America’s Cup is now available on an innovative workboat for impressive speed and performance. That’s possible thanks to Olympic sailing champion Iain Percy, head of Artemis Technologies.
7 photos

The Belfast-based company officially introduced its flagship workboat, a zero-emissions watercraft that can hover above the water, BelfastLive reports. After having recently completed its first sea trials, this high-speed foiling workboat, claiming to be the first of its kind that’s commercially available, is now ready to enter service.

A spin-off of the Artemis Racing team, Artemis Technologies integrated the same foiling technology onto a small vessel that can operate as a workboat or as a ferry that transports crew members to large ships. Measuring 11.5 meters (37.7 feet), this 100% electric watercraft can carry up to 12 passengers with a high speed of 34 knots (39 mph/63 kph), promising a range of 60 nautical miles (69 miles/111 km).

In addition to the eFoiler system comprised of hydrofoil wings attached to the hull, which reduces drag and noise, the Artemis workboat is also equipped with a fast recharging system. It takes only one hour for the boat to be ready to go, flying above the water with zero emissions, as well as more comfort for the passengers. During the boat’s recent real-world trials, the Artemis team was impressed with its performance and ride comfort despite the challenging weather and sea conditions.

The official launch was also welcomed by authorities. Brandon Lewis, Secretary of State for Northern Ireland, stated that it represents “a positive contribution” to the UK’s efforts of reducing CO2 emissions, according to BelfastLive.

The eFoiling workboat is a milestone for Artemis Technologies, but things are just getting started. Percy’s company plans to develop other zero-emission, high-speed vessels as well, seeing them as the future of maritime transportation. 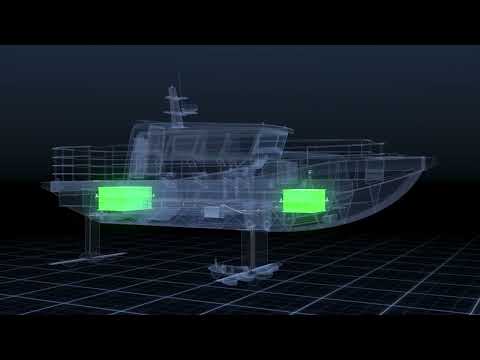