Solar panels are a great way to generate electricity, and are in use around the world for applications ranging from powering small radios and even cities to military and space satellites. Although inexpensive and ubiquitous, they have a weak side: their relatively low efficiency. A team of researchers found a clever way to increase the efficiency of a solar panel by a whopping 50%.

Turning light into electricity sounds like magic, and yet it has become a part of our everyday life. Photovoltaic (PV) panels are everywhere, from solar farms to power small cities to motorhomes and off-grid applications. Even though they seem very efficient at what they’re doing, they are not. Only a fraction of the light that lands onto them is converted into electricity.

This has to do with the fact that only certain wavelengths activate the silicons to produce electricity. The red and yellow portions of the light are the most likely to turn into power, while shorter waves like green and blue don’t create any electrical current when they get onto the silicon in a solar cell. Even worse, they generate heat which makes the efficiency of the panels degrade even further.

Based on that, a team of scientists led by William Shockley and Hans-Joachim Queisser calculated back in 1961 that the maximum theoretical efficiency of a silicon-based solar panel is 30%. In practice, the efficiency is much less than that. Only high-end PV panels that are intended for use in space and military applications get anywhere near that figure. But they are far too expensive for normal commercial use. The average panels used on rooftops of buildings and RVs and in solar farms barely make it above 20% efficiency.

A team of researchers at the University of Cambridge imagined a clever trick to increase that efficiency beyond the maximum theoretical figure of 30%. The great idea that they had back in 2014 was to convert the blue and green light waves into red light. In theory, that would allow for a 35% efficiency or more than 50% increase over the most efficient conventional solar panels in use today. This is like raising internal combustion engine efficiency above 60%.

To pursue this idea and make it possible, the University of Cambridge established a new technology company named Cambridge Photon Energy. According to a study published in the journal Nature, the key to making this work is a photon multiplier film made up of a layer of an organic polymer called pentacene, studded with lead selenide quantum dots. "The polymer absorbs blue and green photons and converts them into pairs of excitons," rights the Nature study. These excitons flow to the quantum dots, which absorb them and emit lower-energy red or infrared photons instead.

The film is placed on top of a regular solar panel so that the light from the quantum dots shines onto the silicon, while the red and infrared light pass through the polymer film and hit the solar cells as it normally should. Thus more usable photons hit the silicon, increasing the production of electrical current. For an explanation of the whole process, we advise you to watch the video below.

That was the theory and the principle was laid down years ago, but we are now approaching the moment this new technology will become commercially available. Cambridge Photon Energy hopes to have a working prototype of a solar panel with 31% efficiency by the end of the year. The goal is to get to a commercially viable PV panel with 35% efficiency by 2025.

You see how going from theory to practice is just as difficult with solar panels as it is with Li-Ion batteries we talk about all the time. The problem is that, for this new technology to work, it needs to be as inexpensive as possible. Otherwise, it will again be viable for military applications only.

The team at Cambridge Photon Energy is working to make the photon splitting layer simple enough to be applied to any solar panel without significantly affecting the manufacturing process. For this, it will have to be a simple, non-toxic material with no electrical connections, just another layer in the normal sandwich of a solar panel. Hopefully, this quantum dot film will allow science to make a quantum leap in solar panel efficiency. 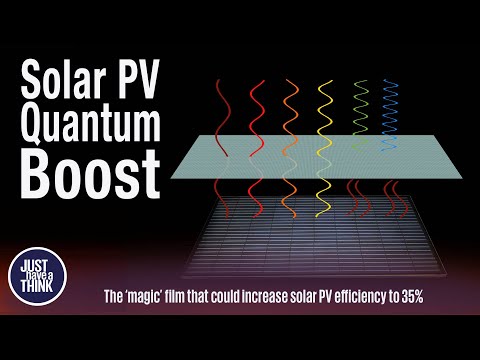