Old-man Ken Block is semi-retired from the world of professional hooning, but the twin-turbo Mustang he's known for, the Hoonicorn, has somehow become a famous drag racing machine. It's gone up against all sorts of exotic and weird rivals, leading to this race against the baddest model ever to leave a Ford factory, the Shelby Mustang GT500.
9 photos

This race is like video games in real-life as two completely different Fords, heroes in their own rights, are pitted against each other in a battle to the death. But while many have unlocked the Hoonicorn in Forza, there's only one in the real world, unlike the GT500. That's right; if the Shelby Mustang can keep up with Block's legendary racer, it will make a lot of owners happy.

All the cards appear to be stacked in favor of the 1965 Mustang drift machine, as its V8 sprouts gigantic turbos through the hood, needed to deliver enough boost for 1,400 horsepower. Meanwhile, the GT500 is Ford's mightiest pony, but it's "only" making 760 horsepower with help from a supercharger. That's quite a lot for something that can be daily-driven. And while the drift car is an impressive bit of kit, it doesn't have carbon wheels.

The road car is also over 1,000 lbs (453 kg) heavier, but the real difference-maker is going to be the AWD in the Hoonicorn, which could give it a massive traction advantage. Right, how can we put this politely. If you raced the GT500 against the Hoonicorn in Forza Horizon... you'd feel like you need a lot more credits to buy something decent.

To make things more interesting, the guys at Hoonigan decide to do a rolling start in the GT500. Win or lose, the Shelby is a pretty fast and quite cool production car. Just don't pick fights with Ken Block's monster machine. 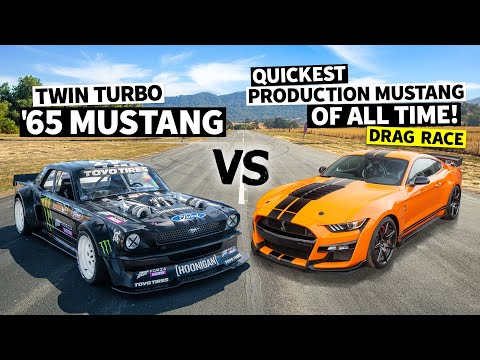