3 Unimpressed by the Design, Independent Rendering Artist Gives the Toyota GR 86 a Facelift

5 Watch This Modified Toyota GR Yaris Blitz the Quarter Mile in 10.54 Seconds
Up Next

Mircea Panait
Developed in collaboration with German automaker BMW, the Supra is a different breed from the Z4. A sports car instead of a sporty cruiser, the ‘Yota makes use of BMW-supplied four- and six-cylinder powerplants.
6 photos

Initially offered with an eight-speed automatic from ZF, the Supra launched for the 2020 model year to mixed reception. Doug DeMuro experienced a six-cylinder example back then, giving it 60 Dougscore points. The more powerful 2021 model received 62, and the 2023 model with the six-speed manual transmission leveled up to 63 points. Why is that?

“Previously, it didn’t quite have that emotional connection, and now it does. I think they’ve done a great job adding the stick shift, I think they’ve integrated it fantastically,” said the San Diego-based auto vlogger. “The Supra is finally back how we wanted it,” he signed off without explaining why the manual-equipped version is one point up on the 2023 Nissan Z.

Nissan couldn’t make a case for a brand-new platform, which is why the Z features the same FM vehicle architecture as the 370Z. The naturally-aspirated V6 is gone for a twin-turbocharged V6 that makes 400 horsepower as opposed to 382 for the turbo inline-six engine of the ‘Yota. The newcomer also happens to be a much better value at $39,990 sans destination charge compared to $43,540 for the four-cylinder auto Supra.

Opting for the sixer and manual brings that recommended price to $52,500 excluding the $1,095 destination charge, which is a bit much by some accounts. On the other hand, the B58 engine makes a bit more power than advertised. BMW also has the upper hand in terms of software calibration, and Toyota really made an effort with the newly-introduced manual.

The German partner wasn’t interested in one for the Z4, which is why the Japanese company had to take the financial hit all by itself. In addition to modifying the center console for the said transmission, Toyota had to use various off-the-shelf parts from ZF to make this gearbox happen. The nerdiest detail, however, is that Toyota experimented with three different gear knob weights. They eventually settled for a 7-ounce (200-gram) unit. 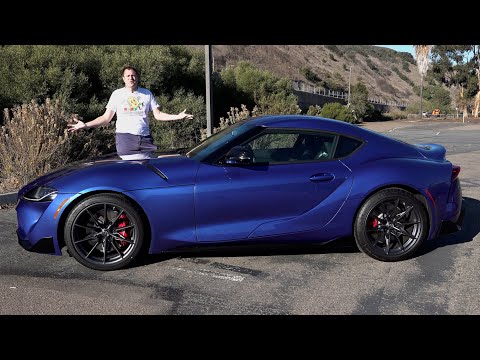