Volvo Announces EX90 as the Successor to the XC90, Will Be the Safest Model Ever

Arguably the hottest compact hatchback in the United States right now, the all-new GR Corolla is a little different from its main competitors. The Civic Type R and sedan-bodied Elantra N are both front-wheel drive, but Toyota made a business case for a trick AWD system in their hot hatch.
9 photos

In standard operating mode, the GR-Four is programmed to split available torque 60 percent up front and 40 percent out back. Engaging sport mode changes those parameters to 30 percent for the front axle and 70 in the rear. As for track mode, 50:50 is the ticket. An active clutch pack on the input shaft of the rear axle manages the torque bias between the front and rear.

Another notable difference concerns the engine bay, where you’ll find a three-cylinder turbo rather than a four-cylinder turbo. Why did Toyota use this configuration? For starters, the G16E-GTS is a unique powerplant, developed by the Gazoo Racing division for two applications. The GR Yaris, for example, has been taken to simply ridiculous output figures by the mad lads at Motive Video in Australia without even touching essentials that include the aluminum block, connecting rods, pistons, or head gasket.

Given these numbers, are you willing to bet your money on the GR Corolla in a quarter-mile drag race? Throttle House’s Thomas, James, and Kartson are much obliged to demonstrate who’s boss in a straight line, and much to the surprise of FWD loyalists, the ‘Yota has the legs on both of its FWD rivals. On the other hand, the roll race ends with a win for Kartson in the FK8 CTR. 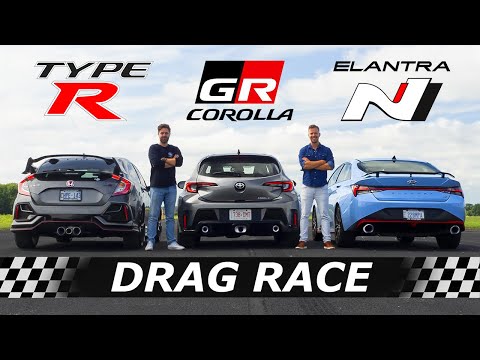