Keith from Trigger Happy couldn’t have it worse. After dropping nearly $60,000 on this SR5 TRD Off-Road 4x4 pickup, the Tundra crapped out with only 335 miles (539 kilometers) on the clock. As you already know from a plethora of Tundra groups, the wastegate actuator is to blame.
9 photos

“It’s been 30 days, as of today, since my truck went into the shop. The dealer called me probably a week and a half ago, and said ‘Hey, your parts are on the way but some of them are still back-ordered.’ That’s the last I’ve heard from them,” said Keith. “I have spoken with some legal counsel about what my options are going forward, and I don’t know what I’m going to do yet.”

Given that it’s been a whole month since the half-ton pickup turned itself into a glorified paperweight, one may argue toward filing a Lemon Law claim. But as the owner said, he’s not sure what to do for the time being.

“I do think this problem with the new Tundra is a little more widespread than Toyota is obviously admitting. Because they’re not admitting anything.” Referring to a previous video uploaded to the Trigger Happy YouTube channel, Keith highlights the following comment: “I had a guy saying 97 miles (156 kilometers) on his Platinum when the wastegate issue arose.”

A similar complaint was posted on January 7th on the NHTSA by another unhappy Tundra owner. Curiously enough, Toyota hasn’t published a single manufacturer communication regarding the wastegate actuator problem.

A little more transparency would help the Japanese manufacturer a lot, especially if you remember that Toyota’s reputation lives and dies by its reliability record. There may be a shortage of wastegates although we don’t know for certain, but for the love of all things automotive, just own up to your mistake before the all-new Tundra’s reputation goes down the drain. 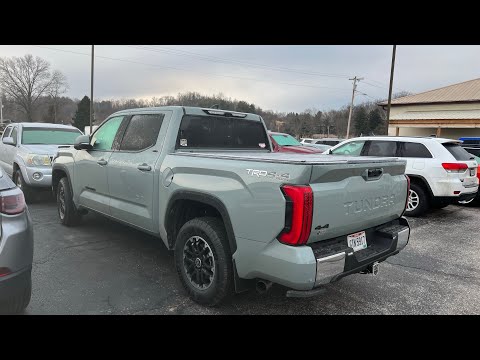 Editor's note: The gray-painted 2022 Toyota Tundra in the photo gallery isn't Keith's truck, but a broken truck posted by MG on Toyota Headquarters.