Several big tuners, and many smaller ones, have already launched various upgrades for the fourth-gen Hyundai Tucson, and it appears that Prior Design is about to jump on the bandwagon too.
12 photos

Proof stands a video that looks quite real, which was shared on their official YouTube channel earlier this month. Nevertheless, it’s all computer generated and shows the compact crossover with rearranged pixels in a very eye-catching way.

You see, most cars don’t look that well with a swollen-up design, yet the 2022 Hyundai Tucson does. It sports extended fenders that retain the black looks, new side skirts, black multi-spoke alloys wrapped in Michelin tires, and red brake calipers.

Up front, the tuner has infused it with inserts surrounding the headlamps, fat chin spoiler, and red accents that remind of the hot N models. The roofline ends with a more pronounced wing, and further down, it has a more aggressive-looking diffuser, with a four-fin design, and cutouts for the quad exhaust pipes. The blacked-out chrome trim contributes to the bad-boy nature of the vehicle.

We’d very much like to see this body kit put into production and equipped to a real Hyundai Tucson, and we might next year, as Prior Design has hinted that they could indeed launch it in a few months.

Meanwhile, there’s enough time to get a Tucson of your own, if you haven’t. The base model kicks off at $25,350, before destination and handling, in the United States. It’s available with optional all-wheel drive and has as much as 187 horsepower. For the 2022 Tucson Hybrid, with its combined output of 226 hp, and standard AWD, you are looking at a minimum of $29,200. The Plug-in Hybrid variant of the crossover is also the punchiest, with 261 horsepower available on tap delivered to both axles, and starts at $34,750. 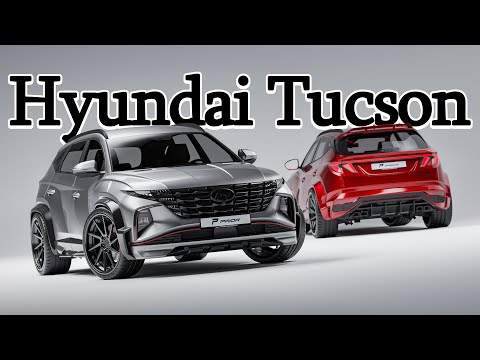