BMW has recently announced full details for the U.S. market regarding the latest introductions of the BMW i brand. So, in the ascending order of their prices, fans can welcome the addition of the 2022 i4 eDrive40 and i4 M50, as well as the 2022 BMW iX xDrive50.
24 photos

All three are a mouthful when trying to pronounce their names out loud and as correctly as possible, but it’s more important to note the major highlights of these three zero-emission emissaries from Bavaria. All three of them are important representatives of the new generation of purely electric vehicles from the German automaker, for starters.

Thus, they all fully rely on BMW’s advanced 5th generation eDrive technology, a platform that “combines the electric motors, power electronics, charging system and high-voltage battery.” The automaker has been producing its own battery modules and high-voltage batteries since 2013, and the experience has allowed it to develop nice perks, such as the DC fast charging capability of up to 200 kW (AC charging at up to 11 kW).

Meanwhile, the 2022 i4 M50 is labeled as M GmbH’s first-ever performance EV, and the appeal derives from the associated sporty perks, such as the two electric motors providing all-wheel-drive traction, the BMW-developed near-actuator wheel slip limitation system, or the launch control feature.

Finally, the BMW iX xDrive50 flagship (a feisty iX M60 with over 600 hp will come later) has an MSRP of $83,200 and comes with a combined electric motor output of 516 hp, as well as AWD. The zero to 62 mph time surges to 4.6 seconds while the estimated range hits the 300-mile threshold. Of note, all three EVs aren’t expected at dealerships until sometime during the first quarter of 2022. 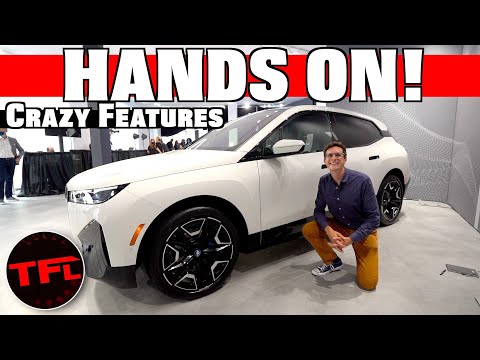