We're pretty sure there are aficionados out there whose dream garages, be they real or, at least for the time being, imaginary, include a 2021 Ram 1500 TRX sitting alongside a Nissan GT-R. That doesn't mean the two extremely different AWD performance machines can't be thrown at each other, does it? In fact, we are here to zoom in on a drag race involving the beasts.
7 photos

Given the fact that the supertruck's top speed is electronically limited to 118 mph (190 kph) due to the speed rating of its go-anywhere tires, you wouldn't want such a confrontation to be too long.

Then again, the battle we have here comes from The Fast Lane Truck, so it was held on the usual IMI Motorsports Complex in Colorado (the race is shorter than a quarter-mile). Actually, those of you who tune in for our stories might be familiar with such adventures by now. Heck, the Ram TRX alone engaged in multiple fights on the said battleground, with this race against the Jeep Wrangler Rubicon 392 being an example as good as any.

The said location brings another quirk: with the elevation sitting at about 5,100 feet (1,550 meters), the reduced air density causes a power loss, even if we're talking about boosted machines. Speaking of which, we'll remind you that the T-Rex relies on a 702-hp supercharged 6.2-liter V8 that works with an eight-speed automatic.

As for Godzilla, the Nissan halo car packs the same twin-turbo 3.8-liter V6 since 2007, although this particular unit sports the 565-hp upgrade given to the "base" model starting with the 2017MY. And the engine is matted to a seven-speed dual-clutch tranny.

There's also the elephant in the room, namely the weight difference between the two, which sits at about 2,600 lbs (1,190 kg). So, there you have it, a way to make the GT-R appear lightweight.

Oh, and while we're talking numbers, here's a riddle for you: what tips the scales at 4,072 lbs (1,847 kg), packs 450 electric horses, and raced the GT-R once the TRX hostilities were over? It's the Tesla Model 3 Performance, of course!

(The action kicks off at the 6:00 timestamp) 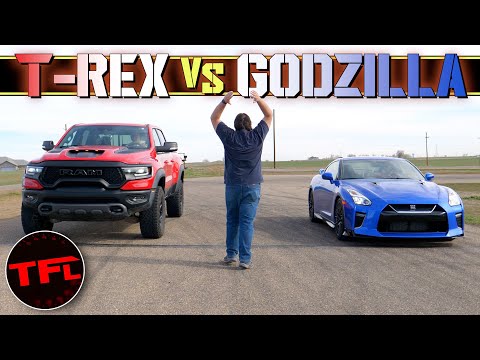