2 LS-Swapped Ford Mustang With 8 Turbos Comes Out to Play, Tires Melt Away

4 LS-Swapped Ford Mustang With 8 Turbos Is Almost Ready, We Talk to Its Creator

A few months ago, we stumbled upon a rather interesting and unique project located in Canada. Kyle had undertaken the task of not only swapping in an LS engine into his Ford Mustang but also boosting it by using a total of eight turbochargers. There were a lot of challenges along the way, and it seems that, at least for now, the project will be put on hold.
11 photos

And "put on hold" is the key phrase here, as Kyle doesn't intend on abandoning the idea. The ups and downs he's come across these past few months have made him understand that he will need a considerably larger budget to make everything work as initially intended. But before hitting the brakes, one last visit to the dyno was in order, after the latest tweaks and upgrades.

If you've followed the story, you probably know that the last time he had an attempt at a dyno run, he managed to squeeze 737 horsepower and 590 lb-ft (800 Nm) of torque out of this thing. The limitations of the build became obvious as Kyle took an entire day for testing. Even though he was considering putting a pause to the whole thing right after that test, his followers insisted that he would give it one last shot.

Just recently, he put on a rather impressive display by doing huge burnouts alongside a few other muscle cars. Still, everyone was really curious to see the car going down the quarter-mile (402 meters) and recording an official timeslip. That won't be happening now, at least not with this setup, but I, for one, felt anxious to see what another dyno test would result in.

After loading the 1995 Mustang onto the trailer, Kyle delivers the car to EP Automotive for its final judgment day. Before actually going in, Kyle walks us through the changes that have happened since the last attempt. "We made the intercooler setup resemble something that's a little bit more equal flow, and by doing this we're hoping we can exceed the 33 PSI (2.27 Bar) we were hitting before, which should result in more horsepower to the rear wheels."

The car sounds as angry as ever, and as Kyle brings the rpm high up for the first run, he gets 20 PSI (1.37 Bar) of boost at 5,800 rpm, but the engine seems to be running a bit lean. For the second run, he goes up to 6,900 rpm, and there seems to be more boost available this time. At 22 PSI (1.51 Bar) of boost, the result is 537 horsepower to the rear wheels, which is still pretty far off from the last time he had the car dyno'ed.

While he isn't necessarily happy with this outcome, he does mention that "on the plus side, our intake temperatures are 59 degrees," which means that all the work he's put into the car recently was not in vain. For the third run, things seem to be heating up, and we get to see some flames coming out as well. The Mustang was now churning out 23 PSI (1.58 Bar) of boost at 7,700 rpm, which makes for 563 horsepower, and 501 lb-ft (679 Nm) of torque.

Kyle decides to call it a day and take it out for a test on the road before moving on with the next phase for the Mustang, which will consist of it going back to a single, large turbo setup. As Kyle told us, "the 8 turbos are going in a bin for now but the idea won't be forgotten. I'll likely save it for next winter when I'm bored again. My plan is the put the 88mm back on the car and enjoy this race season." 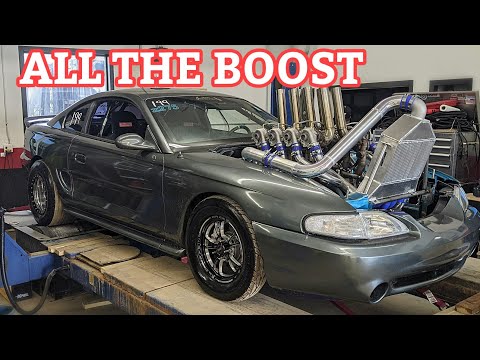