5 The Uplifting Story of How Porsche Brought A Rusty 1967 911 S Targa Back to Life
Car video reviews:
Coverstory

You can't say the all-new Porsche 911 Turbo S surprised anyone by being good, but you could argue it did a little by being as great as it is. Its predecessor set the bar pretty high, and yet the new model cleared it with ease, and then some.
7 photos

And then there's the slightly more refined stuff such as the eight-speed PDK double-clutch transmission that's renowned for setting the standards in the industry, as well as the all-wheel-drive system that makes sure the power gets to all four corners without hampering the 911's handling in any way.

All this combined gets you a claimed zero to 62 mph (100 km/h) acceleration time of 2.7 seconds and a top speed of 205 mph (330 km/h). While the latter is probably bang-on, there is always doubt regarding the accuracy of Porsche's acceleration figures. No, the Germans aren't falsely padding their stats, but quite the other way around.

We've all seen how the Turbo S can sprint off the line in a standing drag race, and even though its goal on Laguna Seca is to set a hot lap, that ability to dig in and propel forward is still going to come in handy after each of the track's 11 corners.

The 911 Turbo S is there as part of MotorTrend's ongoing effort to find the Best Driver's Car of the year, and after shifting through models such as the Mustang Shelby GT500, the Porsche Cayenne Turbo Coupe, or the Chevrolet Corvette Z51, the time has now come for the top dog 911 (GT models excluded) to have a go at the Californian circuit.

However, the Turbo S won't actually be competing against the models we just listed, but rather the 991.2 Turbo S that visited Laguna Seca a few years ago. The previous version of the turbocharged 911 completed the lap in 1:33.21 on stickier R-compound tires, while the new one uses regular street rubber. Watch and see if Randy Pobst manages to ignore that handicap and still beat the old model. 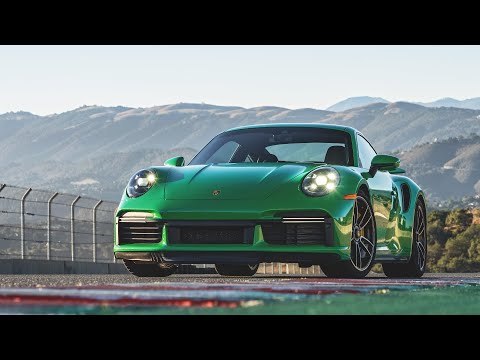