The Chevrolet Corvette, America's sports car sweetheart, has taken a huge step with its eighth generation. We're not even going to pretend we don't know whether it was in a good direction or not because when was placing the engine behind the driver anything other than a great idea?
8 photos

Some would say that, by losing a good number of inches in the length of its hood, the Stingray also lost a bit of its charm. Some call it too "Italian," but that's only because we've been hardwired to associate the mid-engine configuration with the likes of Ferrari and Lamborghini. Besides, since when is mistaking a design for being Italian a bad thing?

Well, when you're supposed to be the ultimate American sports car, it might be. However, any possible doubt regarding the origins of the C8 is quickly forgotten once the Stingray fires up its engine as the sound made by the GM small-block V8 and the exhaust is just as American as the Star-Spangled Banner.

The qualities of the new Corvette did not escape the people at MotorTrend, with the C8 winning the 2020 Car of the Year award. Now, it finds itself on the shortlist for the 2020 Best Driver's Car, and even though logic tells you it should win (it is the Car of the Year, after all), it's not that simple.

Cars are judged differently in each category, and here it is all about their lap times around the Weathertech Raceway Laguna Seca with Randy Pobst at the wheel. We already saw his lap in the Ford Mustang Shelby GT500, so let's see how the GM contender fares.

Quite fittingly, the C8 has the Z51 Performance package, designed to help the mid-engine sports car deal better with prolonged activity on the track. It provides upgrades that keep the vehicle from overheating and the brakes from fading after intense use but also enhance its aerodynamics and acceleration. The latter part is done through a combination of more power (5 extra hp) and a shorter final-drive ratio.

After a series of hot laps around the track, Randy Pobst is completely sold on the new Corvette. "The C8 is a much more refined car than the C7 ever was," he says, accentuating the fact it remained at pretty much the same price level. He also had high praise for its dual-clutch automatic transmission, saying it is dangerously close to Porsche's excellent PDK unit.

The time, however, is a bit underwhelming as the 2020 Chevrolet Corvette C8 Z51 could only better the result of a C7 Z51 by 0.45 seconds. Randy puts it on the tires (Michelin Pilot Sport 4S ZP), but he's not making excuses - he doesn't have to. He claims the Corvette finally has "world-class handling for the first time" and that, from a driver's perspective, is enough to make it the best Corvette ever. 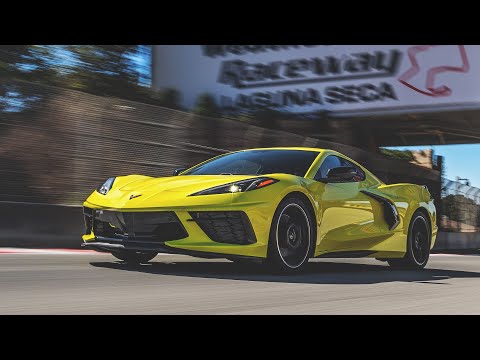