Mircea Panait
As expected of BMW, the 1 Series Hatchback goes front-wheel drive for the F40 generation. Like the 1 Series Sedan from China, the compact model destined for the European market shares most of the chassis and oily bits with the MINI, X1, X2, 2 Series Active Tourer, and 2 Series Gran Tourer.
44 photos

Even the M135i xDrive is not that much different from the X2 M35i xDrive. The 2.0-liter BMW TwinPower Turbo engine develops 306 PS (302 horsepower) on 95-octane gasoline and 450 Nm (332 pound-feet) of torque between 1,750 and 5,000 rpm. If memory serves us well, the previous generation had an inline-six turbo with more suck-squeeze-bang-blow and rear-biased xDrive.

Performance figures? 4.8 seconds to 100 km/h (62 mph) is everything the M135i xDrive has to offer with the ZF 8HP automatic transmission, and that’s shameful for a hot hatchback with premium aspirations. The Mercedes-AMG A 35 4Matic, which is the closest competitor to the BMW, is much obliged to hit that speed in 4.7 seconds. Given that the A 45 S is coming with more than 400 ponies, the Bavarian contender can’t help but raise the white flag.

Customers looking for more performance can expect November 2019, the month when BMW will introduce the M Performance package to the M135i xDrive. Opt for this upgrade, and the sprint to 100 km/h drops by a tenth of a second to 4.7 seconds. The top speed of the newcomer is limited by electronic nannies to 250 km/h (155 mph).

Even though it features an additional 20 liters of cargo capacity in the trunk, 380 liters matches the volume of the Audi A3. The A-Class takes a step back with 370 liters, but nevertheless, there are roomier options in the compact segment. To be unveiled in June 2019 at the #NEXTGen event in Munich, the 1 Series will be offered at launch with two gasoline and three diesel options.

Customer deliveries will begin before the end of 2019, and pricing information will be announced closer to the European launch of the F40 generation. 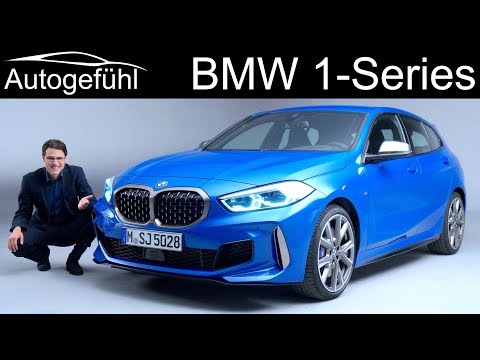