5 This 1968 Chevelle Is Almost a Wreck, but the Internet Still Loves It
Car video reviews:
Up Next

We've gotten so used to restomods that try to take classic muscle cars to the next level. However, while a Mustang or a Camaro might benefit from an extra aero, this Chevelle SS seems to wear its retro lines with style.
15 photos

The car belongs Nik, who's generally into the exotic/luxury type of motoring, but decided to get a good sample of muscle cars as well. After talking to Shawn Davis, AutotopiaLA's resident muscle expert, he decided to put Vintage Motorworks in charge of the restomod makeover. Fresh out of the shop, the Chevelle is now the star of a YouTube feature video.

The starting point was a very nice-looking Chevelle SS, which has kept its black paint with white rally stripes. The original frame has also been preserved, but the handling is now much-improved thanks to Detroit Speed suspension components, including fully adjustable coilovers.

Besides the actual sports rotors and calipers, they also added a Willwood brake booster, and the owner says this 50-year-old car now stops "like a modern car." But for us, the most interesting feature has to be the Forgeline center-lock wheel setup. Center-locks are supposed to be for track use, and you almost never see them on muscle cars. Obviously, purists are going to hate them, though probably not as much as an LS in a Mustang.

The 502 Big Block is fitted with 3-inch pipes and exhaust cutouts. It really screams while burning rubber with ease, and the way they tucked in the muffler tips into the body is really nice.

Talk between the owner and Shawn inevitably leads to the conclusion that while the Camaros and Mustangs are cool, you probably can't get more American muscle car than with a Chevelle. Obviously, not everybody will agree, but it's hard not to like this clean restomod. John Wick is also mentioned, as the gun-slinging movie character drives the 1970 Chevrolet Chevelle SS 396 as a loaner from his mechanic after his car is stolen. 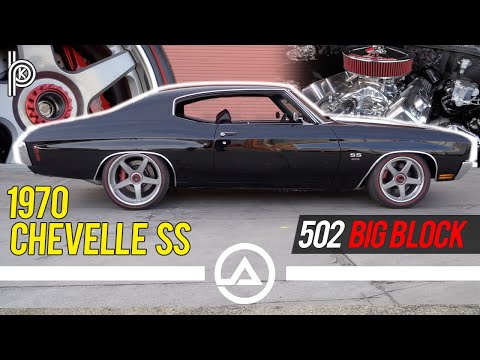