The temple of muscle car appreciation that is AutotopiaLA has showcased yet another cool car. It's a 1966 Ford Mustang Fastback that's been put together by Art from T34 Speed for owner Andrew, who's not afraid of what the haters are going to say.
7 photos

The Mustang is dubbed the "Mongrel", as in a dog that's not any specific breed. It's a fitting name for such a diverse collection of parts that come together to form a unique 1966 Ford. Of course, the really big one is the engine, which is an LS.

We really don't know why some people get upset over this kind of stuff. Putting an LS in a Mustang isn't cheating. This is a modern-day hot rod, and it's supposed to be all about putting the best racing parts in what you have, not keeping it original or sticking to one brand. We've heard lots of Mustang owners say the Coyote doesn't fit right under the hood unless you mess around with the towers.

The Mustang also has a full roll cage going right around the body, from the front into the trunk. Detroit Speed makes some of the best restomod equipment, and they supplied the new chassis and suspension - rear end, four-link rear, the lot. That's probably a good thing because even though this is a street tune with not a lot of power, the stroked 427ci LS still puts out 600 horsepower at the crank or 505 hp at the tires.

And for stopping power, the Mongrel relies on Wilwood Masters ventilated and cross-drilled performance brakes, plus some extra-wide tires wrapped around staggered Forgeline wheels. But the exterior is probably the most attention-grabbing aspect of the car. Highlights include the full Ringbrothers front end, fiberglass fenders and rear flares, a carbon hood, and side exhausts. It's rough and ready, which combined with the green paint gives off "army vehicle" vibes. 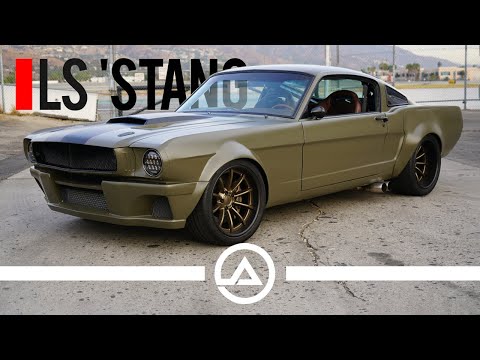 Editor's note: The model year of Mustang has been updated to 1966. We looked at our browser history and found the title of the video has been changed. At the time of writing, we believed this was a 1968 with a different look because of the Ringbrothers front fascia that the owner talked about. Either way, it seems a lot of you hate the "Mongrel"