The constant quest for perfection in every detail has led to the development of a new hydraulic chain tensioner, which makes the engine both quieter and more reliable.

For an engine that is not an F3 800 offshoot but the evolution of the 3-cylinder unit mounted on the Dragster, the configuration on the Brutale 800 Dragster RR is the most powerful ever to go into production. The 140 hp at 13,100 rpm are achieved in part because of the fully redesigned airbox and an optimised, more efficient exhaust system. Changes have also been made to the electronic injection, which has an advanced sixinjector system (two per cylinder, instead of the single injector used on other Brutale models): a reshaped fuel tank interior provides the necessary space and keeps everything hidden from view. The resulting power delivery is linear at low revs and explosive at high revs, giving the three-cylinder engine eye-watering acceleration, which ends only at 13,200 rpm when the rev limiter kicks in. Power is not the only thing to have been given a considerable boost: torque has also been raised, from 81 to 86 Nm. Figures like that clearly illustrate the impressive individuality of this revamped MV Agusta 3-cylinder engine 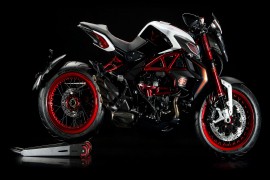