This machine is an extremely limited edition version of the base V7 II racer, and has been produced in only 50 units. Unlike the base model, this limited version bears a very strong resemblance with the 60's and 70's cafe racers, employing a minimalist design, but Mandello del Lario still succeeding in incorporating the latest technologies under that cafe racer style. In addition, a special, race gold paint scheme has been designed especially for this model, and it comes with a detachable passenger cowl, to further accentuate its classic, cafe racer design. 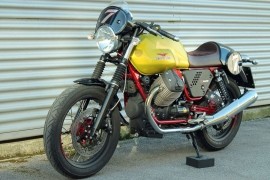