The first generation of the Octavia RS was a well-deserved success, and the Czech carmaker insisted on producing a successor for it in both shapes: hatchback and station wagon.

Skoda introduced the second generation of the Octavia in 2004, and it was a car worth waiting for the European customers. It offered compact-segment pricing, mid-size segment interior space, and the trusted Volkswagen reliability. For those who needed a bigger trunk, the carmaker offered it in a station wagon shape as well. Then, in 2005, it added a spicy RS seasoning for driver's delight.

While other carmakers tried to make their hot-hatches look more aggressive, Skoda had another idea: make the car subtle. The RS version didn't feature any aggressive front bumpers, big wings in the back, or wider wheel fenders. The only specific visible features were the VRS badge on the grille, its 17" light-alloy wheels, and a double exhaust in the back. It was not bland; it was subtle.

Inside, there was a different story. First of all, the RS, chromed, door-sills welcomed the passengers. As an option, the carmaker offered a set of sport bucket-seats with the VRS logo embroidered on the front's backseats. The Octavia II RS Combi featured a 580 liters (20.5 cu-ft) trunk size that could be expanded up to a staggering, for its class, 1,620 liters (67.8 cu-ft) by completely folding down the rear bench.

Under the hood, Skoda dropped a Volkswagen Golf GTI engine paired to a six-speed manual or, as an option, to a six-speed automatic. The carmaker also offered a fuel-efficient turbo-diesel version that pumped out 258 lb-ft (350 Nm) of torque. 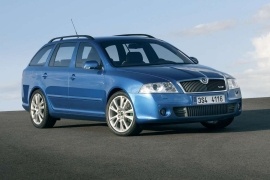