Since this kind of car didn't exist, somebody had to invent it.

And this person is Dan Panoz. An engineering genius who previously worked for Lister, Maserati and Lotus. He decided that the United States deserves a car with the same racing pedigree as the Europeans. In 1989 Dan Panoz came up with a plan, installed the famous 5.0-V8 engine from the Ford Mustang and there you go! A race-car with number plates.

The hardest job was to adapt the car for the American roads and be able to register it. The rest is history, but the history still remains. The Panoz Roadster is still in production after 30 years. The upgrades and novelties brought on it over the years are quite respectable. But it doesn't have Android Auto nor Apple CarPlay.

The little nimble Panoz Roadster can go from 0 to 60 MPH (97 KPH) in 4.3 seconds and to 100 MPH (168 KPH) in just 13 seconds. But that was just the beginning. After receiving the homologation from U.S. Authorities, the Panoz Roadster received in 1996 a new engine: the 4.6l V8 from the Ford SVT division. Nowadays they switched on the famous LS3 engine from Chevrolet, which offered the same 430 HP from a naturally-aspirated 6,2 liter-engine.

Combined with the light weight of the vehicle of only 2570 lb (1170 kg) the performances were great. New wheels and small adjustments were added to the vehicle, thus made it more planted on the ground, with better roadholding capabilities. 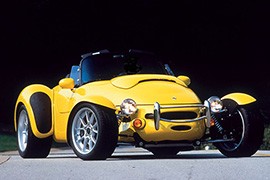