When Panoz started to race in the GT category at the LeMans series, it had to build a particular vehicle: the GTLM version of the Esperante.

Building a race-car is complicated, but winning on the grand stage is a different story. For a small carmaker such as Panoz, who couldn't compare with the big racing teams like Porsche, Ferrari, or Aston Martin, it was even more challenging. But the little underdog managed to do that in 2006, winning at the 12 hours of Sebring and the 24 hours from Le Mans in the GT2 category.

The car was based on the same Esperante lineup, but it had some unique features distinguished from the rest of the stable. For starters, it featured a deeper front spoiler with an A-shaped grille at the bottom and two side scoops. On the sides, the carmaker installed vents on the fenders to extract the air from the wheel-wells. In street clothes, it didn't feature a big wing in the back.

Inside, the Esperante GTLM kept a similar interior as the lower-powered model but with some carbon-fiber trims on the center console. Panoz kept the instrument cluster on top of the center stack since Don Panoz considered that it was the best position for the driver, who could keep an eye on the road while still reading the data.

Under the hood, the GTLM version kept the same 4.6-liter V8 from the Mustang but aided by a supercharger that increased the power up to 420 ponies. It was good enough for the light vehicle to make it rocket from 0 to 60 (0-97 kph) in 4.7 seconds if launched perfectly. 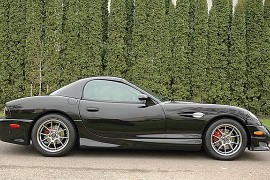