Karl Maybach faced the difficulty of continuing his father's legacy after Wilhelm Maybach passed away in 1929, and the first model built after the tragic event was the W6 lineup.

In the late 20's it was much easier to make a convertible since all the cars featured a body-on-frame construction. Selling them was a different story. But Karl Maybach already had the network and the brand image to do that. He had the idea to produce an entry-level for the brand, creating the W6 lineup. The company already made the DS7, which featured a V-12 engine, but it was costly. With the new model, he tried to get more customers and offered a Maybach-quality vehicle with an inline-six powerplant under the hood.

At the front, the W6 featured a chromed bar between the long wheel-arches that supported the big headlights. Its slightly pinned-out radiator with vertical slats was pushed far behind the bumper, above the front axle. Since the car's engine compartment was long, it allowed the carmaker to install two spare wheels on each side. For the open-top version, Maybach offered a unique system that allowed full or partial opening.

Inside, the leather and wood trims blended harmoniously. There was more room in the back than on the front seats. It was a car where the owner was usually driven around by a chauffeur. Just two years after the launch of the new model, the world economic crisis struck, and the carmaker lost most of its customers, and those who aimed for a Maybach sought the top-spec version. 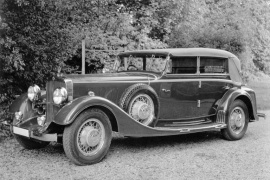