After the company's founder, Wilhelm Maybach, passed away in 1929, his son, Karl, took the lead, and he faced the challenging times of the Great Depression during the early '30s when he tried to provide luxurious vehicles but at a lower cost.

Built with a choice of closed or open bodies or even a chassis-only, the DSH lineup was not as successful as Karl Maybach had hoped for. And yet, the carmaker managed to sell about 50 of them.

The DSH Cabriolet was a larger car than the W5 lineup it replaced, featuring a longer wheelbase and enhanced bodywork. Just like Mercedes-Benz, it mounted the headlights on a curved cross-beam supported by oversized, curved front fenders. The radiator was surrounded by a chromed trim, matching the supporting bar and the bumper. Since Maybach used to be an aviation company, its engineers knew a thing or two about aerodynamics, and they tilted the windshield to decrease the drag coefficient. The convertible sported four doors, both of them hinged on the B-pillar. At the back, behind the passenger area, Maybach installed an external trunk.

Maybach installed a luxurious cabin fitted with leather upholstery and expensive wood trims on the dashboard and door cards. Moreover, a handlebar was mounted at the back of the front seat's seatbacks so the rear occupants could egress more easily. Strangely, though, the side windows were not retractable but removable with their rim.

Under the hood, the carmaker installed an inline-six engine. It was not exactly half of the 7 or 8-liter V12 since it provided a 5.2-liter displacement. Moreover, it offered more than half the power of a Maybach V12, and since it was paired with a four-speed sequential gearbox, it got similar performances as the Typ 12 Cabriolet. 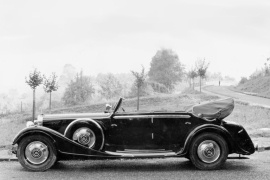