Ford released the third generation of the F150 Raptor in 2021 as a 2022 model year, and it was meaner and hard-core than before.

In 2009, Ford stunned the world with the introduction of the Raptor's first generation. It was praised for its high-speed off-road abilities. Soon, the competition started to match its performances and caught-up. But then, the blue-oval brand released a second generation. In 2021, with the third generation, it was even tougher and readier to fly over bumps, dunes and potholes.

But Ford didn't forget to make it look business. Maybe it looked too massive to make someone think that the F150 Raptor could jump, even though it did it easily. Its flat front grille featured the big FORD lettering on it, sidelined by a pair of LED headlights. Ford's designers didn't try to hide the aluminum skid-plate under the engine and pulled it to the front bumper. From its sides, it was the regular, four-door F150 with a separated bed in the back.

The interior was slightly reworked when compared to a regular loaded with options F150 Crew Cab. Active Orange punctuated an interior packed with Tremor detailing, including unique seat trim with superior stitching, materials, and finishes for the center stack, center console, and doors. A wide TFT display filled the instrument cluster and offered various functions for the car, including specific ones for the Raptor version.

Apart from the new twin-turbo engine paired to a 10-speed gearbox, the Raptor featured a special-tuned chassis. The five-link rear suspension featured extra-long trailing arms to maintain a better axle position on rough terrain, a Panhard rod and 24-inch coil springs - the longest in the class. 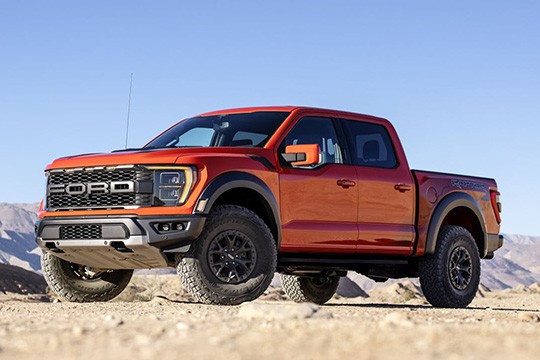