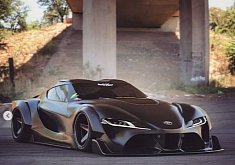 27 Jun 2022, 05:14 UTC / NASA successfully launched a rocket from a commercial spaceport outside the U.S. for the first time, and it was also a premiere for Australia in over 25 years

24 Jun 2022, 02:46 UTC / Dream Chaser, the unique spaceplane with wings that can land anywhere in the world, could be landing in New Mexico in the following years

Spaceport Camden to Become One of the Top Launch Sites for U.S. Space Missions

22 Dec 2021, 08:01 UTC / Spaceport Camden officially joins Cape Canaveral and the Kennedy Space Center, as one of the strategic launch sites on the East Coast.

2 Aug 2021, 07:22 UTC / UK officially launched its new Space Command, a department that will play a major role in advancing Britain's role in space and enhancing its defense strategy.

British Spaceport to be Built in Scotland

16 Jul 2018, 09:15 UTC / The UK government will announce plans to build a vertical launch spaceport in northern Scotland as a means to include Britain in the aerospace industry.