It started in 2017 with a simple sketch and three years later, an experimental aircraft was born. Now, Czech Republic-based manufacturer Zuri releases a video with the first hover test of its hybrid VTOL (vertical take-off and landing) flying machine.
7 photos

Zuri carried the test back in September, but it only shared the video now, boasting of achieving a true milestone in developing its aircraft.

The VTOL with a wingspan of 36 ft (11 m) took off and achieved its first hover flight at an airport near Zbraslavice. Even though it was just a short hover up to 9.8 ft (3 m) altitude, it was still a great opportunity for the team to measure several performance parameters of the motors and control systems, parameters they couldn’t obtain during the aircraft’s ground performance tests.

Zuri’s large-scale demonstrator is being used for testing all the components in hover mode. The next step is for the company to upgrade the unmanned aerial vehicle to a full single-seater airplane. In the end, we’re going to see a VTOL with a hybrid powertrain and a maximum takeoff weight of 4,400 lb (2,000 kg). It will require a landing area of just 26 x 26 m (85 x 85 ft), which will allow pilots to skip airports and land the aircraft anywhere, from a roof of a skyscraper to the city’s periphery. As for the speed of the aerial vehicle, it will be able to fly at 280 kph to 320 kph (174 mph to almost 200 mph).

One of the main advantages of the Zuri VTOL will be its hybrid powertrain which will contribute to an extended range of approximately 720 km (447 miles). Zuri also claims its flying machine will have a very low acoustic signature.

Right now, Zuri is seeking funding for further development of its aircraft and might consider crowdfunding to raise the money. 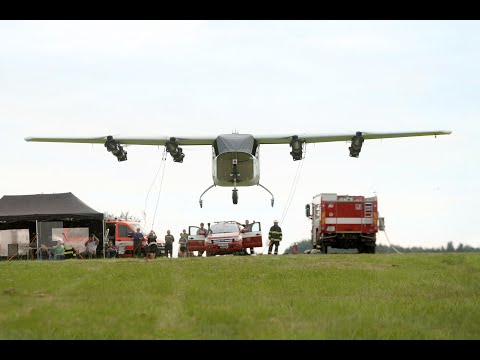