2 LIFT Hexa, the Flying Car You Don’t Even Need a Pilot’s License For

5 Eviation Alice Is a 9-Seat Electric Aircraft with 600 Miles Range Coming in 2018
Car video reviews:
Up Next

Airlander 10, the world’s largest aircraft, still has a long way before it goes into production, but Hybrid Air Vehicles (HAV) is already making considerable progress with the production model.

World’s Largest Aircraft, Airlander 10, Gets Even Bigger Before Production

If either name rings a bell, it’s because both have been in the news a lot. Airlander 10 is also affectionately called “the Flying Bum” because of its bulbous shape, and a prototype was able to carry out 6 successful test missions in one year before breaking its moorings and self-deflating in the world’s smoothest crash in 2017.

The prototype cost some $42 million to make, so while smooth, the crash wasn’t exactly painless.

HAV retired the prototype after the mishap but never gave up on the initial goal of achieving zero-carbon flight. In the summer of 2018, it came back out with another plan, to extend the functionality of the aircraft to include luxury expeditionary tourism, in addition to offering it to the military and for cargo transport.

Earlier this month, HAV revealed that it’d been working steadily on the production model, adding considerable updates that improve efficiency and maximize functionality, reduce drag and boost stability, and make it even bigger. The prototype measured 302 feet, and the production model is now at 320 feet, offering more space that can be used whichever way needed depending on customer.

For instance, the main cabin (excluding flight deck) will now offer 2,100 square feet of floor space, which means a wider and longer cabin for those luxury expeditionary tourists. HAV plans to take about 16 of them to destinations like the North Pole, so comfort is key here. There is the possibility to opt for different layouts, depending on what the aircraft is used for: the payload module can be made shorter, if need be.

The current production model isn’t just bigger: it also comes with an enhanced shape and, just as importantly, with a new architecture that allows it to integrate new technology that would turn it all-electric. Modifications to the payload module have been made, and a new forward propulsion system has been added, reducing weight and drag.

HAV says the production model boasts an architecture that allows “uncomplicated retrofit of new technologies including electric propulsion, throughout the lifetime of the aircraft.” The company is working with Collins Aerospace and the University of Nottingham to develop a new electric propulsion system that will, one day, be added to Airlander 10.

Handling in all modes of flight (take-off, climb, cruise, descent or landing) is now improved, and some environmental operating limits, like wind speed, have been increased. Maintenance on the ground has also been improved, with standard repairs or replacements possible on the mooring mast.

The landing gear is now fully retractable during flight. The prototype featured non-retractable helicopter-type landing skids, and the production model is now equipped with six retractable legs, allowing for reduced drag and better views for passengers, as well as more ground stability.

Reduced drag means improved fuel efficiency. HAV says that the production model achieves up 75 percent lower carbon emissions than comparable aircraft, with hopes that a future hybrid-electric model will boost that percentage all the way up to 90. As stated above, the goal remains to achieve zero-carbon flight.

The updated Airlander 10 can cover approximately 2,000 nautical miles and can stay up on the air for three entire days. It is quieter, albeit much slower than conventional aircraft, but HAV plans on using that to its advantage: as a luxury travel aircraft, it will soar to 16,000 feet at 92 mph and offer breathtaking views thanks to side panels and floors made of glass.

HAV is eyeing an estimated 2024 for the delivery, saying it hopes to put some 12 Airlander 10s in the air that year. It’s also working to certify it with the European Aviation Safety Agency (EASA) and the Federal Aviation Administration (FAA), to ensure that it will be operable worldwide. 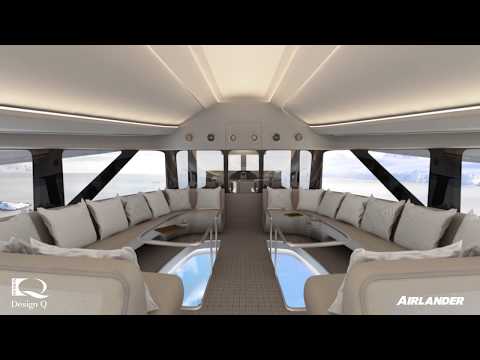