2 How Far Can You Drive an EV at Highway Speed: 10 Popular Models Tested

3 What Should You Consider Before Buying an EV?

What Happens if You Run Out of Energy in an Electric Vehicle? Test Shows It Depends

Electric vehicles bring an entirely new set of challenges for drivers, and one of them involves figuring out how much they can be driven when they have run out of energy. All modern electric vehicles have a battery indicator, a range estimate, and a low battery warning, but what happens when you ignore them?
8 photos

The Brits at Carwow have decided to figure it out, and they have devised a test. First, they lined up six electric vehicles, all with their batteries fully charged. Each vehicle was then driven by a member of the team until it ran out of energy. The goal was to see how far each electric vehicle can be driven, and to find out how it behaves when it "dies."

The vehicles selected for the test are, in alphabetical order, Audi Q4 e-tron, BMW iX3, Ford Mustang Mach-e, Hyundai IONIQ 5, Kia EV6, and Škoda Enyaq. We have driven some of them, but we did not attempt to drive them until they ran out of energy, for practical reasons.

As you may be aware, the behavior of electric vehicles may vary when they reach zero percent on their battery. The same may happen to some conventional vehicles that show zero range yet can sometimes be driven even if their onboard computers say the remaining range cannot be estimated because it is too low. While a conventional vehicle can receive fuel and be on its way, it does not work that way for EVs.

Now, in the case of electric vehicles, some will simply reduce power from a certain battery level, then reduce it even further, and then move on to stop providing power to the wheels. Once the vehicle is stopped in that situation, it cannot move any further. On the other hand, other vehicles will allow for "emergency maneuver mode," which allows driving at speeds of up to four mph to enable the driver to move the vehicle if necessary.

With that in mind, not all known electric vehicles behave the same, and it will be awhile before there is an “industry standard” on the matter, if ever. If you asked us, we would like the vehicle to be able to move under its power for just a bit more when its battery level reaches zero percent. Watch Carwow's video below to how the selected cars hold up. 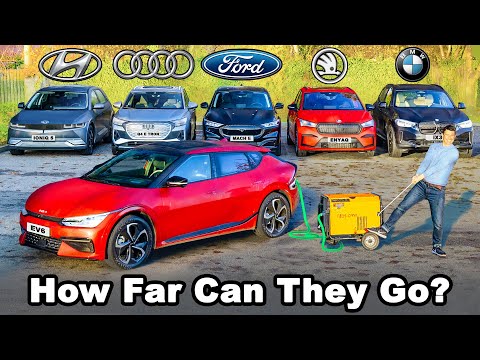