1 Hackers Can Unlock Honda Cars Remotely, See if Your Vehicle Is in Danger

2 Hackers Are Targeting EV Chargers for Fun and Profits, Prove It's the Weakest Link

Mircea Panait
Hacking comes in many forms and with many purposes. Governments take it to the next level, but cyber warfare isn't of the essence to regular peeps like you and me. Closer to home, hackers may use data from readily available sources to sell your personal information or steal your moolah.
6 photos

But hacking doesn’t occur exclusively through web resources. There are peeps who specialize in hacking automobiles, which is a huge problem nowadays. Donut Media is much obliged to present a few notable car hacks, including a hack that works brilliantly with an $80,000 Tesla Model Y.

Replay attacks would rarely go further than opening the doors because many cars use rolling codes. Every time you press the key fob’s lock or unlock button, the code automatically changes, making the SDR a bit useless.

Donut Media’s host subsequently comes across relay attacks with a simple Google search. As opposed to replay attacks, the relay attack is more sophisticated because you can trick a car into thinking that its key is closer than it actually is by relaying the signal. But there’s an even better way of hacking into a car, according to security consultant Sultan Qasim Khan.

Sultan is a Bluetooth expert, and his proprietary version of the relay attack exploits a huge vulnerability in keyless entry technology. Teslas, which currently ship without key fobs, are especially vulnerable because you can use your mobile phone as a key. The big question is, how is this gentleman’s Bluetooth-based relay attack better than the conventional relay attack?

“The basic concepts are the same, in that you’re making the two sides think that they're close to each other. But the difference is that with Bluetooth, it's switching frequencies all the time, and there is some more complexity in handling the frequency hopping and direction switching. I mean, I just used free software and off-the-shelf hardware. You could make a relaying device for like $10. And you need two of those. So, let's say 20 bucks to make a basic version of the attack feasible,” explains Sultan Qasim Khan. 20 bucks and two laptops. And some cables. And programming skills...

Curious about how it works out? Then fast forward to the 10:00 mark. 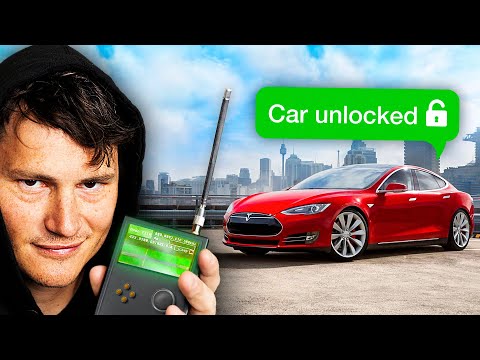