There's a fine line between a fast hatchback and a hot hatch. That can be seen in everything from the equipment offered to the design and performance. And what better way to visualize this than by comparing a Mazda3 Turbo with a VW Golf GTI.
5 photos

The Mazda3 Turbo is virtually unique because it's a potent compact with a premium kick. However, Mazda made it very clear that this is not a spiritual successor to the Mazdaspeed3, so we shouldn't expect torque that yanks the steering wheel or an exhaust sound that will get you in trouble with the police.

Under the hood is an unusually large engine, the 2.5-liter turbo that is shared with a number of other models. It makes 250 horsepower and 320 lb-ft (433 Nm) of torque on premium fuel, but the one in this drag race is apparently fueled on regular gas, in which case it makes 227 hp because it's really not performing well with the lower quality juice.

On the other hand, the Golf GTI only has a 2.0 TSI. Puzzlingly, it's described as having 220 hp in this video, even though it's supposed to make 228 hp, including in Canada. But despite not having AWD or a big-enough engine, the German hot hatch lets the Mazda get a good look at its taillights over four separate races.

What happens is exactly the opposite of what we expected. Due to the AWD and higher torque, the Mazda3 Turbo should rocket away from the starting line, but it's the GTI that pulls ahead, suggesting Mazda didn't set the car for quick launches. And in the two rolling races, the German starts from behind and catches up.

There are small advantages the GTI has which are difficult to spot. For example, the Mazda3 Turbo is heavier by about 110 lbs or 50 kilos. Also, the 6-speed DSG gearbox is quicker to shift and may have shorter gears for acceleration.

To be clear, a new Golf GTI is just around the corner with more power than before. But with a base price of about $32,000, the Mazda3 Turbo represents good value. Basically, they're not rivals, so drag racing proves nothing. 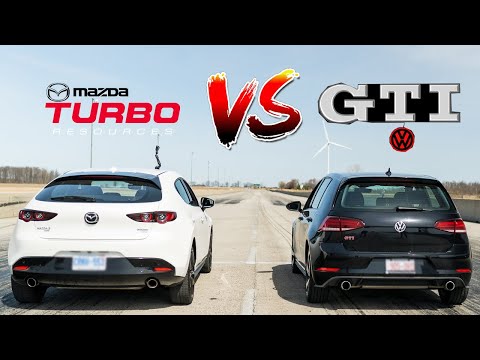