Treat Your C8 Chevrolet Corvette to a Carbon Fiber Wing Inspired by the C8.R

Aurel Niculescu
Corvette fans already know the C8.R racer is making a particularly good impression on the track, despite the current woes that have affected motorsport competitions all over the world. Which is why many owners of the stock mid-engine C8 would gladly import some of that potential onto the streets.
6 photos

Victor Racing and Aerollari have recently presented a new accessory that might just do the trick. We are talking about their new aftermarket wing/spoiler choice, directly inspired by the one used on the C8.R ‘Vette. It arrives at the right time, since the official high-wing option has been riddled with availability issues.

The new static wing (with adjustable tilt) has been developed by Victor Racing at home in America and features a deck mount setup (it will be attached directly onto the rear hatch) - so it does not hinder access to the truck and engine. Mounting the wing should be easy – included in the set is a metal support plate which is placed on the inside recess of the hatch. The aluminum pieces get bolted onto it thus supplying increased structural rigidity.

According to Aerollari the new wing from Victor Racing is taller than a standard Z51 spoiler and even sits higher than a stock high-wing option. The companies have also tested it up to a maximum speed of 140 mph (225 kph) at the maximum incline angle to make sure it is safe to use. Aerollari’s contribution to the partnership with Victor Racing included the creation of custom carbon fiber end caps.

These come in two styles -C8.R/C and SR-22. The former is directly inspired by the C8.R Corvette, while the latter is a carbon fiber-clad homage to a couple of racers in the sky – the SR-71 Blackbird and F-22 Raptor jets. The caps come in exposed clear coat carbon fiber and one set is included free with the purchase of the wing for a limited period.

The new wing will become available the week of August 9th and comes with a sticker price of $1,699 (the shipping fee for the lower 48 states is another $149). For the first 45 days after the introduction Aerollari and Victor Racing are also throwing in either set of optional caps, later both will cost $249 per set. 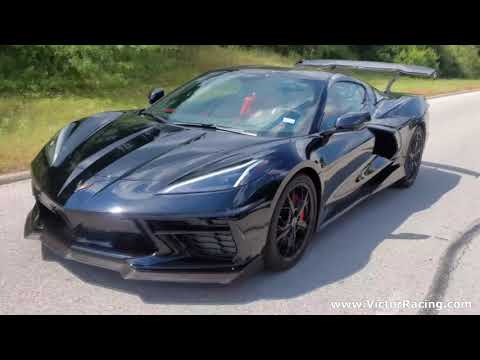