2 Ferrari Icona Spotted With Production Body, Could Be Revealed in November

5 A Look Back at Ferrari’s First Hybrid Road Car, the Iconic LaFerrari
Car video reviews:
Up Next

Almost 9 years have passed since the LaFerrari, to this date the fastest road-going car in Maranello history, started its limited production.
12 photos

We are now at the end of a tumultuous 2021, and the LaFerrari is still the last ‘Cavallino Rampante’ supercar with a mid-engine V12 engine, making a lot of people wonder when its successor in the Ferrari stable will arrive.

Well, it looks like we’re not far from that moment, as Ferrari engineers we’re recently spotted testing a rather mysterious prototype.

Looking like a modified Ferrari LaFerrari, the mule’s sighting gives us more questions than answers, opening the book of speculations as wide as possible.

If you watch Varryx’s spy clip down below closely, you can see and hear some peculiar details that could mean a lot of things.

First of all, the quad exhaust pipes at the rear are fake, with the real exhaust sitting higher up and it the middle, between the taillights.

This detail first made us think that the car is actually a mule for the upcoming Icona Ferrari, a 330 P4-inspired limited edition model that is set to be unveiled as early as next month.

That said, the Icona model has already been spotted with a production body, so why would Ferrari test it using a LaFerrari mule so close to its official unveiling?

Second of all, while the LaFerrari and most other ultra-high performance Maranello supercars use center-lock wheels, this mule has the more traditional five-nuts per wheel.

Lastly, but probably most importantly, the prototype sounds like it has a turbocharged engine, and the Icona P4 is expected to feature a naturally aspirated V12.

All these made us think Ferrari might actually be testing its upcoming twin-turbocharged V12 engine or a long overdue LaFerrari replacement, which is expected to be a hybrid of some sorts.

What we know for sure is that it still uses a mid-engine setup, and the performance should be definitely one tier above the mighty LaFerrari, and the choice of any other engine but a V12 for such a project would be downright blasphemous. 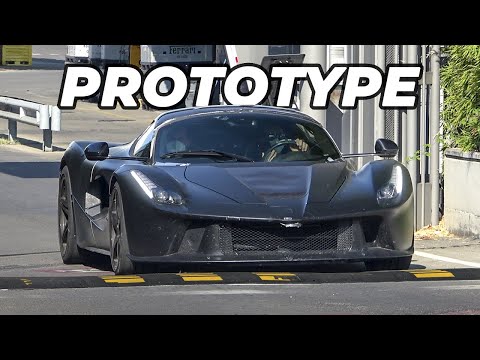