The defunct Dodge Viper has always had one of the most passionate communities behind it, even though it wasn't ultimately enough to save the nameplate from extinction back in 2017.
6 photos

Most of you probably remember this, while Dodge was sadly slowing down Viper production to a sorrowful and screeching halt, a group of enthusiasts and two Dodge Viper dealers were raising money to beat the Nurburgring lap record for production cars.

Seeing that FCA was simply letting an American automotive icon to die without a struggle, a good bunch of Viper aficionados raised over $200,000 through GoFundMe contributions to make the dream of many happen.

In the end, it would have taken a bit more stars to align so that the all-time production car lap record at the time was to be beaten, but one of two Vipers GTS ACR-E sent to the Nurburgring did manage to lap the Green Hell faster than any other American car before or after it.

The first scheduled attempt at a record was supposed to take place on July 25th, 2017, months before the Viper went out of production, but pouring rain conditions made it impossible to even try. A day later, Dominik Farnbacher managed a staggering 7:03 minute lap on his first try, still a bit shy of the 6:57 minute time of the Porsche 918 Spyder, the Ring King at the time.

On their last attempt, which took place about a month later, racing driver Lance Arnold nailed a 7:01.3 minute lap time on his first try, but the crowdfunded team simply ran out of luck afterward.

Both cars were plagued by high-speed tire failures, and the record car even suffered an accident because of this, but not before going faster than any other rear-wheel-drive manual transmission car before or after it.

After all that, BJ Motors and Viper Exchange, the two dealers to set this whole thing up built five Commemorative Edition GTS-R ACR-Extreme Vipers to celebrate the huge accomplishment that even Chrysler had been afraid to tackle.

All five cars feature identical decals, including a list of all the people who were involved in the Nurburgring shenanigans in 2017. So it happens that Serial #001 went under the hammer with no reserve at Barrett-Jackson's Scottsdale event last year.

The car is not just ultra-rare and one of the most coveted special edition Vipers ever but it also has just 7 miles on its odometer, all of them being test and delivery miles. Heck, it still has plastic covers on the seats, and we're pretty sure that they will remain there for the duration of the car's life.

You can check out most of the story behind the Nurburgring runs in the following video: 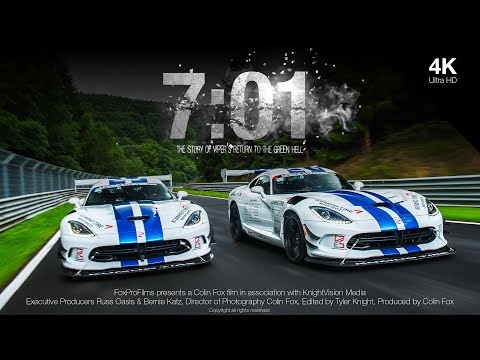