As part of its restructuring plan, Chrysler introduced the 200 lineup as a successor for the Sebring model, and it brought a breeze of fresh air into the mid-size sedan segment.

There was no secret that under the flashy bodywork was an older, 2006 Mitsubishi platform. Fortunately, it was a good one with a large application even for bigger vehicles, such as the Dodge Journey MPV. Besides, the new name helped the customers understand that the 200 was the smaller brother of the 300 flagship.

At the front, the car featured swept-back headlights with curved lines and sharp angles. Its chromed, reversed trapezoidal grille resembled some older Chrysler models since the '40s. From its sides, the arched roofline kept the same shape used on the Sebring lineup, including the thick rear C-pillars, blamed for quarter-rear visibility.

Inside, the designers installed a three-dials instrument panel under a rounded cluster design. An elegant analog clock took the top spot on the center stack, between the air-vents, while the uConnect infotainment screen found its way in the middle height. Its rotary knobs resembled the ones installed in a few Fiats, and that wasn't such great news, but as long as the Italian brand wasn't sold on U.S. soil, customers didn't notice it.

Under the hood, the carmaker installed a choice of two engines paired as standard to a six-speed automatic transmission. The lower-priced and lower-powered version still provided 173 hp, which were more than enough to offer good performances. 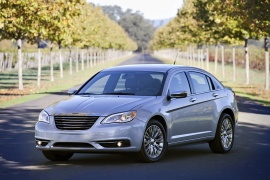