Chrysler introduced the fifth generation of its Town and Country minivan at the 2007 Detroit Auto Show, and the most significant change in the vehicle's lineup was the deletion of the short-wheelbase version.

While the world started to feel the effects of the financial crisis, Chrysler launched its new minivan range. Yet, the American carmaker made a smart move by offering the vehicle with only one wheelbase option, thus reducing the production costs.

Chrysler offered the Town and County in three different trim levels: LX, Touring, and Limited. Certainly, the minivan didn't look like a mundane vehicle anymore, especially on the higher trim levels. At the front, it featured a wide grille with horizontal slats. In the apron, on the lower side of the bumper, Chrysler designers placed a second grille flanked by two air intakes that hosted the foglamps as well. On its sides, the MPV featured two sliding doors for the rear passengers and regular, front-hinged ones for the front occupants. At the back, the vertical drop of the tailgate was business as usual in the minivan segment.

The interior was also garnished with upscale materials and a state-of-the-art sound system, fit to entertain the children in the back. Depending on the options, the Town and Country was available with up to eight seats. The second and third rows could completely fold into the floor, leaving an impressive, flat loading area. At the front, the carmaker installed an SUV-inspired dashboard that featured an infotainment unit with a color display atop the center stack, while the driver was spoiled with white dials in the instrument cluster. 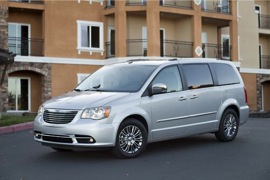