Daimler-Chrysler introduced a European version for the Crossfire in 2007, just before the world economic crisis struck the automotive industry and led to the little roadster dismissal.

It was all joy and fun between Daimler and Chrysler. Dr. Dieter Zetsche was already appointed as the company's CEO and played a key role in advertising the advantages of the merger. Its line "After all, we invented the automobile" was well-known, and the new products confirmed the valuable alliance. The little roadster Crossfire was built on the same platform as the Mercedes-Benz SLK R170 and was a major step forward for the U.S. sport-compact market. Even though it wasn't sold in big numbers, it managed to make it into a world dominated by big American engines. Some named it the hairdresser roadster, but nevertheless, it was an agile, affordable sports car.

The car's look showed a unique front fascia with its headlights that resembled the ones installed on the Chrysler 300. Its bigger exterior and narrower interior lamps were specific for the little roadster. Its A-pillars were silver, regardless of the car's color. As required by the safety rules, the car featured arched roll-bars behind the seats, which popped-up in a roll-over crash situation.

Inside, Chrysler designed a cabin with American inspiration but with Mercedes-Benz quality control. It was a major step forward for any U.S. roadster in terms of materials, trims, and finishes. Its high-bolstered seats provided great lateral support during high-speed cornering.

Under the hood, Mercedes-Benz installed a 3.2-liter naturally aspirated V-6 carried over from the C-Class and E-Class range. It was paired as standard to a 6-speed manual, while a 5-speed automatic gearbox was on the options list. 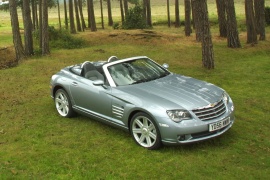