1 Are Hoverboads Safe? Lawyers Warn of Fire and Injury Risks

2 Motorcycle Helmets, a Matter of Choice

5 AAA Michigan: Legislators Should Not Make Motorbike Helmets Optional
Up Next

This $20 Helmet Could Have Prevented 1,4 Million Fatalities in the Last 12 Years

Sebastian Toma
Some say that if you live in a house that has a roof, windows, doors, electricity, and running water, you are wealthier than millions of people. Others might add that having access to the Internet, along with the right to express yourself without fear, makes those who have these things richer than their account balance might suggest.
6 photos

Unfortunately, there are people that find some of the things we take for granted to be a luxury and struggle to make ends meet every day. In the fortunate circumstance, when those people do have access to a means of transportation, it comes with two wheels and no safety systems.

In poorly developed countries, the importance of road safety is overlooked. Moreover, those who are interested in staying safe while they are using a vehicle with just two wheels cannot afford to get a helmet that has been developed with safety in mind.

The FIA, which is motorsport's governing body, started a project called the Safe and Affordable Helmet Program. Through that project, the organization has accomplished developing a helmet that is safe in the event of an accident but also has enough ventilation to make it suitable to wear in tropical climates, as well as being affordable.

This week, the FIA posted a video that presents the helmet that it has distributed through its national organizations in several countries where road safety is a severe problem because of poverty.

I must admit, I was not aware that his project existed, and I was not aware of the road fatality figures linked to motorcycle accidents where a rider or passenger was wearing a poor-quality helmet or did not wear a helmet at all.

Yes, I am aware that I was privileged enough to be educated of the dangers of not wearing a helmet on a bicycle, moped, or motorcycle, and I was fortunate enough to be able to afford a proper helmet when I started riding motorcycles.

According to the United Nations Motorcycle Helmet Study, out of the staggering 3,4 million deaths from motorcycle crashes recorded between 2008 and 2020, 1,4 million could have been prevented if the riders and passengers who perished were wearing helmets like the one designed by the FIA and its collaborating helmet manufacturers.

Can you imagine what a $20 device could have prevented? If we look at the preventable deaths over the 12-year period, we have an average of 110,000 preventable deaths a year. To put that figure into perspective, it is twice the minimum capacity of an NFL stadium.

For reference, the highest listed peak seating capacity of any NFL stadium in the U.S. is 82,500. It is attributed to the MetLife Stadium, which is home to the New York Giants and the New York Jets.

The FIA has contributed to the production and distribution of over 50,000 helmets but wants to make and distribute five times as many. These are supposed to be offered to riders, along with the instruction to wear them every time they use their motorcycles or engine-powered bicycles or mopeds.

Through this video, the FIA seeks help from companies that want to make a social contribution and help save lives. As the FIA notes, just having a helmet is not enough in the event of an accident, as that helmet must also be safe.

Since the world has numerous standards for helmets, it may be confusing to know which is which, and that is why the FIA has decided to develop a new kind of helmet just for developing countries.

The second goal of the project was to demonstrate that there is a market for cheap but safe helmets. Sadly, even if these helmets were present in stores across the world, many motorcycle or moped users would not wear them.

To make matters worse, the people in poorly developed countries might have to make a choice between a helmet and food for the week, which is why the FIA donated helmets to as many of them as it can.

The FIA cannot afford to hand out a helmet to all poor riders in the world, but the organization has demonstrated that it can be done and will continue to do so in the future, within the limit of its budget.

Hopefully, those unidentified factories that make knockoffs will refrain from counterfeiting this product as well. The original design is meant to be sold at a recommended price of $20, so there is not much to be gained from each sale but through massive volumes.

With all that behind us, I cannot explain to myself why riders in developed countries would even think of riding without wearing a helmet, despite being able to afford one. For some, their excuse is "freedom," but I believe that they have a different understanding of the concept of freedom. 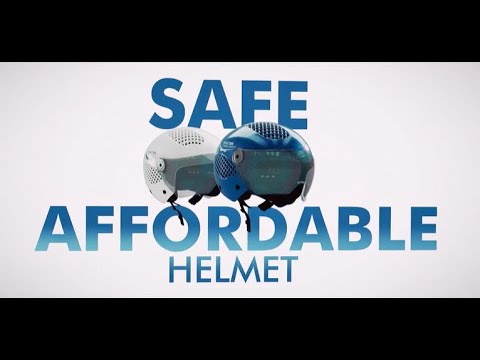