4 This Crazy Contraption Is an E-bike, a Scooter, and a Treadmill

So, I was walking down the street the other day and I see a guy fly past me on what looked like a bike. But get this, it had no seat. So naturally I thought it’s some BMX thing. Naw, He came back and I got a second look. And that’s where I just stopped understanding what I was looking at.

Honestly, what we are looking at is considered a bicycle. But if you ask me, I would highly disagree. Here, we can pretend for a minute that someone did ask me, so here goes.

First of all, this bionic bike is unlike any other so-called bikes in that is has a completely different propulsion system than what we may be used to. Some bikes are electric, while others use a classic pedal crank system, and some can even be powered by cranking your arms. Heck, we’ve even seen bikes powered by treadmills. Fine, we can call it a bike! I had forgotten about that last one with the treadmill.

Now, what sets the step twin aside from other bikes is that the pedal motion is all wacky. Here, before you go on reading, check out the video below to fully understand what it is -  I'm at a lack of words trying to describe.

Checked it out? Yeah, weird as hell, huh? So if you paid the least bit of attention you noticed the riders aren't pedaling old school in a full circular motion. But rather, it looks like they’re trying to kickstart some motocross bike.

However, that motion we see does have some science behind it. It’s supposed to mimic the classic leg motions that walking humans display. Whether or not that’s true I can’t say. But every time I check out that video, I don’t see that motion. I just don’t.

That’s not to say that this mechanism doesn’t have its benefits. One nice thing about this sort of drive system is the fact that it uses two separate propulsion systems at once, one for each pedal. This allows you to operate the entire bike with just one leg if you wish. You can also alternate legs, similar to biking, or even use both legs in unison similar to the motions a rower displays.

This leads us to this trinket’s next function, to offer you one hell of a workout. I haven’t had the occasion to ride such a thing, but it does seem like a workout is exactly what this will give you. But again, if one leg gets tired, just work with the other one. Oh, each drive also has its own independent speed shifter. This is to say, that you can be pedaling in third with your left leg, and in the fifth and final gear with the right. Depending on physical state and abilities.

Did I mention it can all be folded in half in under 20 seconds and tossed into the trunk of your car or on a bus? Yeah, and depending on what accessories you might get on your Step, it weighs in at 15.4lbs (7kg).

Sadly, the bike is an older project that was once launched on IndieGoGo, where you could preorder the steel frame Twin for just $221. What a steal for something like this! I wonder why it didn’t take off, as we investigated ordering one and had no success. 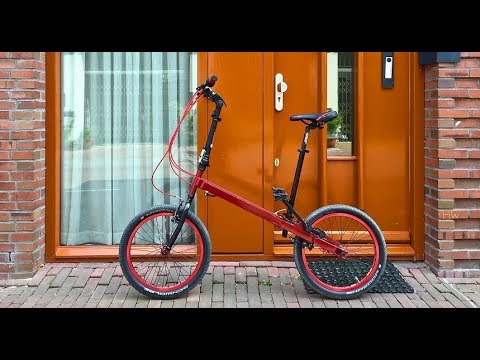