1 This 1952 Ford F-1 Custom Truck Drives Only Backwards, Is Confusing and Awesome

4 For 2020, Concours d’Lemons Will Assault Your Eyeballs Over the Internet

5 The Roush Racehorse Training Car Is How a Famous Tuner Increases Horsepower
Car video reviews:
Up Next

Here’s Your First Look at Tesla Berlin Gigafactory, With Rave Space on the Roof

Some heroes wear capes. Others ride on a Cadillac chassis and are (probably) the passengers in the world’s first hot rod school bus.

Meet The Shortcut High Bus, the school (s’cool?) bus that’s also a hot rod, a combination you’re not likely to come across that often. The project is a famous one, having been to SEMA in Las Vegas in two separate years and, as such, it’s totally deserving of a revisit on autoevolution’s Custom Builds Month.

The Shortcut High Bus is the work of builder Jerry Bowers from Virginia and its purpose is perhaps the only thing more impressive than the idea of turning a school bus into a hot rod: for more than 15 years, it served to spread the message to kids that they should stay in school.

It took Jerry five years to complete the build sometime in 1999-2000. The idea for it came to him suddenly, as he was chatting with friends about how there weren’t really any buses hot rods in the world. From then to the moment when he’d be able to get behind the wheel was a long and difficult journey.

He started off with an actual 1949 Ford school bus that had seen better days and the chassis of a Cadillac Eldorado. He lowered and chopped the body until it fit the frame, and then made a variety of other modifications with the goal of having everything look as natural as possible.

“It was about seven feet [2.13 meters] longer than it actually is and about 3 and a half feet [1.06 meters] taller than it is now,” Jerry says in a 2015 interview with Barcroft Cars, which you will find at the bottom of the page. “We cut and shorted it – and when it was done we wanted to make sure it looked like everything fit together.”

Because this is a school bus but not quite, Jerry knew he’d have to have a way to get inside like in a regular car. School buses don’t have doors on the driver’s side, so he set out to build one from scratch.

Inside, he put the seats from a Toyota Supra, which are “super comfortable,” and benches for seven passengers. The video below sadly doesn’t show enough of the interior, and maybe that’s because the focus of the project was on the outside. This is a vehicle for marketing and entertainment purposes, and while it can carry passengers, presumably in comfortable conditions, that came as an afterthought in the design.

The bus sits on fat tires in the back, and is powered by a 1977 Oldsmobile 403 big-block and FWD Hydramatic transaxle. Another major element is the blower that sticks out of the hood, which spins and catches the eye but does nothing in terms of performance. Erry is the first to admit that it’s up there for show. A third eye-catcher was added after the project was completed: the big spoiler on the roof, which Jerry custom made so it would make the bus fit the theme better.

As mentioned above, the bus was built so it would get the attention of kids and, at the same time, get them interested in education. When Jerry gave the interview below, he’d been touring the U.S. and Canada with wife Brenda, in The Shortcut High Bus, with support from various organizations and charities, delivering the message that young’uns should stay in school.

“We’ve been with several charities helping kids and collecting school supplies for kids in Iraq and Afghanistan,” he explained. “We’re trying to promote youth staying in school and becoming entrepreneurs. This bus will be going long after I’m gone – I’m hoping to get some major sponsorships so it can be doing a whole lot more.”

Sadly, that didn’t end up being the case. Just two years later, in 2017, the bus was listed with the AutoBarn Classic Cars in Concord, NC for the asking price of $199,995. No word if it ever secured a buyer but, as far as we can tell, it never resumed touring for educational purposes: the official website is currently offline, while no update has been posted to the official Facebook since three years ago. 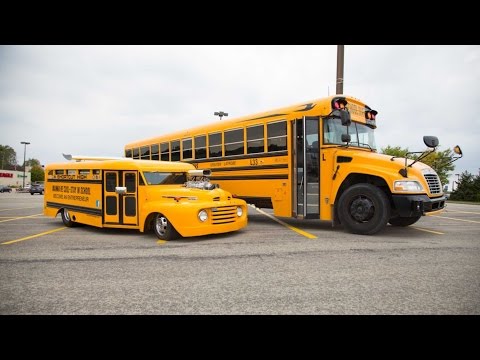 Fast on Land and Water, the Gibbs Aquada Could Have Revolutionized TransportationSee all coverstories