2 This California-Made Giant Volkswagen Beetle Is Bigger Than a Hummer, Still Cute

4 Unique Bugatti Chiron “Hellbee” Shows Up in Monaco, Gets All the Attention

One of the reason the 2015 Mad Max: Fury Road proved such a hit with car enthusiasts was that the extreme mods featured in it upped the insanity to 11. Mortis would have fit right in.

The Mortis 6x6 Hearse Fails to Maintain a Reverent Silence

Mortis is a massive, monstrous, loud and powerful 6x6 hearse built off a 1967 Cadillac Superior funeral coach. It’s no longer a hearse per se and, even if it were, it would fail to keep the reverent silence required at these events.

Mortis is made for mud bogging and because master mechanic Jimmy Driver thought it would be an awesome rig to build. It bears some resemblance to the famous Gigahorse shown in Mad Max: Fury Road, except that it’s bigger and slower, and more reliable when it crawls over rocks or through the mud.

Driver bought the hearse back in 2004, saying in a 2018 interview (see the video at the bottom of the page) that he paid $600 for it and then immediately drove it from Utica, Mississippi to Naples, Idaho, Mortis’ current home. He started work on it right away. Mortis is made exclusively from scrap parts, whether from buses or tractors. Those parts that couldn’t be lifted off junkyard vehicles were built by Driver and his friends.

Mortis is Driver’s monstrous baby, but putting it together was proper teamwork: even his wife took part in building it, saying the project actually helped bring the family and friends closer together. Driver’s wife recalls going out on dates to work on the hearse, while friends would often spend the night tinkering on it.


“All we had to work with was a ’67 Cadillac hearse and an old deuce and a half frame with some axles,” Driver explains in the interview. “We slid them together with the help of a few friends and a little bit of welding and made us a mud bogger.”

For those not familiar with the concept of mud bogging, Driver offers a definition: “Mud bogging is pretty much a bunch of rednecks getting around a mud puddle and stirring it up with their 4-wheel drives, having a good time, burning gas, and drinking beer.”

That’s why Mortis is right at home on the mud track: with its massive 6 wheels and independent suspension, it can go where other trucks can’t. It won’t get there in a hurry, because it can only top speeds of 12 mph (19 kph), but it’s bound to get there, sooner or later. Very high ground clearance also makes it a good choice for climbing rocks; sure, Driver can’t see much of what’s happening on the ground, which he admits is a problem, but he plans on solving it.

Despite the high cost of the project, Driver says he would never consider selling Mortis. He doesn’t “really like money all that much” because it tends to distract him from all the fun he can have, so how much he spent on it was never an issue. As such, he won’t even entertain the thought of selling it. Instead, Driver plans to hand it over to his son, so he can play with it for as long as he likes, and then he can decide what to do with it next.

Talk about a legacy. 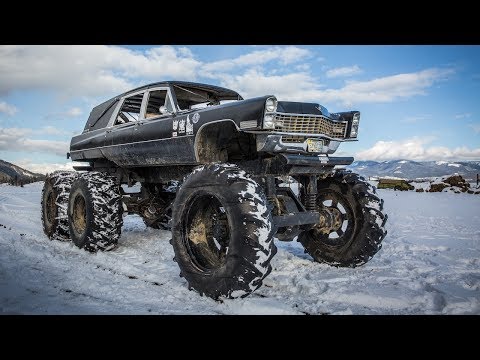