2 Student Bikes from Scotland to Greece: 48 Days on the Road to Get Back Home

5 The Iwind Filtration System Promises to Give Cyclists a Faceful of Clean Air
Car video reviews:
Up Next

Bike sharing was a nightmare before the current health crisis and it will probably continue to be so after it’s over with. But it doesn’t have to be this way, if the MIT Media Lab City Science group has a say in the matter.

As cities expand and become overcrowded, people have started turning to alternative means of transport. Urban mobility is being redefined by a variety of solutions, with bike-sharing being one of them.

Many people living in crowded urban areas don’t want or can’t afford ownership of a bicycle, even a regular one. That’s why ride-sharing services have started picking up ground but, with them, comes a whole new series of problems. The biggest, as identified by the team at MIT, is the rebalancing of fleets.

This appears with docked bikes and implies that, at that certain hours of the day, certain docking stations are overcrowded, while others are completely bike-less. Similarly, depending on the hour, you will find empty docks outside of city centers, while city centers are literally overcrowded.

Dockless models for ride-sharing are not without challenges, either. The biggest is that of over-quantification of fleets, which is when an operator will bring in more bikes than riders need. In turn, this translates to bikes parked on the pavement, littering the streets and causing more problems.

Both models imply human staff gathering the bikes at the end of the day for relocation, re-charging or, most importantly these days, disinfecting and sanitizing.

The MIT Autonomous Bicycle Project would solve all these issues. This is basically a 2-in-1 bicycle that riders can summon via an app, which rides itself to and from the pickup point, and then to the charging station.

When used by the rider, the MIT concept is a regular bicycle. It’s not motorized, so you have to pedal to move around the moment it arrives at the pickup point and disengages from autonomous mode. To get into autonomous mode once you’re done with it, the bike becomes a trike.

The rear wheel is actually two slimmer wheels joined by two linear actuators, which separate and bring them together, as need be. To move around in autonomous mode, the bike makes use of two motors: a hub motor to drive the front wheel and a secondary motor for steering. Meanwhile, the two separated rear wheels offer balance, ensuring that it doesn’t topple over.

The project is led by Naroa Coretti, a master’s candidate on the team, and Kent Larson, the group’s director. In June this year, the team had a working prototype, which had been tested on campus to excellent results. You can see it in action in the video below: while the sight of a trike traveling on its own is somewhat odd or mayb even unsettling (because it’s not a common one), the benefits of such a bike part of a ride-share fleet would be numerous.

For one, riders would no longer have to worry about walking the distance to the closest dropoff point or charging station, while authorities wouldn’t have to bother about the bikes being abandoned all over the place. This would cut down commuting time and considerably reduce frustrations for riders, but it would also translate into costs cut for operators – and overall in less pollution for the environment, since the operators wouldn’t have to drive vans across the city to pick up bikes.

The MIT bike, the group says, “can not only operate as part of the shared economy, but also provide a convenience that has not been achieved with other existing solutions.”

During initial tests, the MIT Autonomous Bicycle was remote controlled, but the team is looking forward to including autonomy hardware and software in the next semester’s tests. Also then, they will also be “explor[ing] and validat[ing] new designs and business cases” to further illustrate how this could literally become the future of bike sharing. Wouldn't that be something? 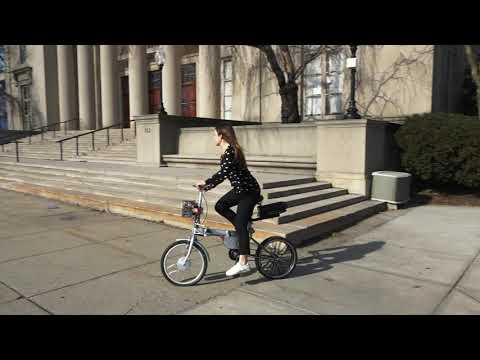