2 Tesla Model S Plaid Races Full-Blown Dragster, BEATS the Hell Out of It Down the 1/8-Mile

5 1,400-HP Hoonicorn Gets Challenged by 2JZ RZR, Is Lia Block in Trouble?
Car video reviews:
Up Next

Meet Aluna 87, a Stunning Multi-Purpose Yacht That Can Carry Many Toys

Teslaris Is the World's First Tesla-Powered Polaris RZR RS1, It Looks Like an RC Car

Between 2010 and 2020 it felt like everyone was performing either LS or 2JZ swaps into their cars. People would argue over the two possibilities, and each party had its solid arguments. The most common discussion factors were related to reliability, performance specs, and associated costs. While both types of engines are still popular today, we're seeing a new trend these days: Tesla swaps for vehicles that were normally powered by ICE.
12 photos

EV conversions are becoming more and more popular each year. And people are making the most out of their creativity when performing these conversions. We've seen Tesla-powered VW busses, Mazdas, and even Minis. But does anyone remember seeing a UTV with a Tesla swap?

Enter Ron Cobbley from Layton, Utah. Last year he decided to embark on a journey that no man had ever gone on before. In April of 2021, he introduced the world to Teslaris: his soon-to-be Tesla-swapped Polaris RZR RS1 UTV.

He ditched the internal combustion engine in favor of a much smaller and much more potent Tesla Model 3 rear-drive unit. By the end of May 2021, Ron took the car out to the dunes for an initial shakedown. As you might expect, he was constantly pulling wheelies throughout the entire test session.

Still, Ron silently worked towards his goal of unveiling his dream project at the SEMA Show in Las Vegas. The electric UTV was on display at the Hostile Wheels booth, but Ron has just recently started uploading videos of his machine online.

This thing has a curb weight of just 1,800 lbs (816 kg), which is just slightly more than what you would get from a bone-stock RZR RS1. There are two Prius Prime batteries tucked away beneath the bodywork, which should provide a range of 60 miles (96 km) on asphalt, but less on the sand.

Reportedly, the whole project required a budget of $30,000, but just look at it go! Ron had it dyno tested, according to the chart he should have 300 horsepower at his disposal, and somewhere around 370 lb-ft (501 Nm) of torque.

This UTV is street-legal, believe it or not. Watching a POV perspective of it in action and witnessing the reaction of the different drivers behind the wheel makes it easy to understand how fast Teslaris is. Suddenly, doing a backflip in this becomes a rather scary possibility. 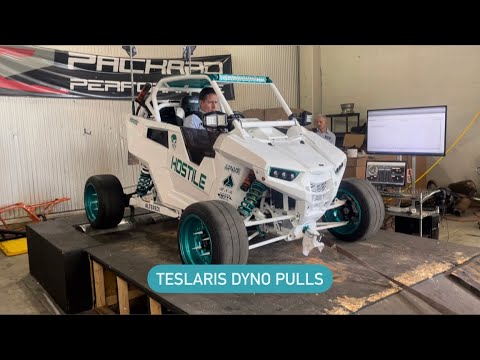