5 LS-Swapped Toyota Tacoma Is a Drag Beast in Disguise, Runs 9s
Car video reviews:
Up Next

This year’s edition of the SEMA show has thrilled us with some amazing custom vehicles. We got a chance to see a 2JZ-swapped Lambo, or a Ford tractor with a turbocharged 7.3-liter Power Stroke, but arguably the craziest and most daring build revealed in Las Vegas was Rich Benoit’s LS3-powered Tesla Model S.

The Story of ICE-T, the World’s First Tesla With a Chevy V8 Under the Hood

Introduced in the summer of 2012, the Model S quickly became one of the most popular vehicles on planet Earth. It made Elon Musk more famous than Nikola Tesla, the legendary inventor after whom the company was named, and helped accelerate the automotive industry’s transition to all-electric power.

The fast-paced evolution of these technologies spearheaded by Tesla has also given birth to a new trend among custom builders, some of which have given up engine swaps for EV conversions. Today, countless classic cars have been given new lives courtesy of battery-electric powertrains, many of them being sourced from the aforementioned manufacturer.

Of course, it was only a matter of time until someone would go the other way around and stuff a good ol’ internal combustion engine (ICE) into a Tesla’s frunk.

One of the people responsible for turning one of Greta Thunberg’s worst nightmares into reality is none other than Richard Benoit, also known as Rich Rebuilds to his 1.25 million YouTube subscribers.

Before some of you eco-warriors out there start making voodoo dolls of him, you should know that Rich is actually a car enthusiast who loves all things electric, making a name for himself by breathing new life into totaled EVs and converting several ICE-powered rides into all-electric machines. Moreover, he co-founded Electrified Garage, one of America’s first third-party Tesla repair and tuning shops, a place where you can get modify or fix your EV without spending obscene amounts of money as you would normally do at one of Tesla’s dealerships.

So, why on Earth would you convert an EV to ICE power rather than the other way around? Well, that’s a question that no real car enthusiast would ever ask, because, why not? But, to give you a better answer, I followed Rich’s channel and learned the story behind the fascinating build that became one of SEMA’s biggest stars this year.

The story starts with a flooded 2015 Model S which he brought and intended to restore. After completely stripping it down and thoroughly cleaning every component, Rich had a sudden attack of altruism and sent several front-end parts to a friend who was also restoring one. Moreover, finding a new battery for the car was as difficult as bringing peace to the Middle East, so he got the outrageous idea of fitting a V8 into it.

Since he owns a Corvette Z06 and identifies as an “LS snob”, Rich ended up sourcing a 6.2-liter LS3, a six-speed TR 6060 manual, a rear end, and several other parts from a fifth-generation Camaro SS.

Fitting an LS into another ICE-powered vehicle is not that hard, if you know what you’re doing, of course. Converting one of these vehicles to electric power isn’t hard either but, putting a V8 into a Tesla and making it all functional was considered impossible by many, which is why nobody had ever done it before.

To make this incredible swap possible, the next six months were spent modifying the aluminum chassis which was sourced from another wrecked Model S. The bulk of the work went into strengthening and modifying the chassis. A transmission tunnel had to be fabricated from scratch, while the front and rear sections were heavily modified to make room for the Chevy engine and rear end.

This part was extremely complicated, to say the least, and the guys had to deviate from the original parts in some areas, as was the case with the OEM electric steering rack which had to be replaced with a hydraulic one from a Camaro because it wouldn’t provide enough clearance for the engine.

The wiring had to be completely redone, another arduous task and if you think that the team had an easy job from here on out, you’re sadly mistaken. That’s because they had to fit all the Camaro-sourced hardware into the car and get it firing. Next, parts for the custom exhaust, braking, and air suspension systems had to be fabricated and mounted onto the chassis.

Although it retains many OEM parts, including the reupholstered seats, dashboard, climate control system, and screens, the interior was also extensively modified. The most obvious example is the center console where a Haltech display and a motorsport-derived sequential shifter were mounted.

The exterior also maintains a stock look, save for the matte bronze finish. Hand-built exhaust tips stick out on both sides, close to the rear wheels and the charging port integrated into the left taillight was replaced with a metallic fuel cap taken from a boat. It helps provide fuel for the gas-guzzling Tesla through a Radium fuel cell mounted snuggly into the trunk, next to the 12V battery and fuse box.

Another set of subtle modifications can be found in the front. On the bottom right corner of the bumper, behind the original vents, two ducts redirect fresh air to the radiator. Behind the other vent, the team fitted the air filter which is connected to the custom 4-inch intake tube.

Because of the extensive modifications that had to be done in a relatively short amount of time, the V8 remains in its original 426-hp configuration. However, Rich states that the plan is to swap it with a fully modified supercharged version and combine it to a bigger rear end.

Sitting on fully polished WELD S77 forged wheels wrapped in Toyo tires, the car which was nicknamed Internal Combustion Engine Tesla (or ICE-T) made its SEMA debut at the Vibrance Performance booth and quickly stole the show. It was one of the star attractions and people couldn’t believe their eyes when they saw an LS under the hood.

While this car might be the ultimate blasphemy to some, for us true automotive enthusiasts, it’s a unique example of engineering excellence and dedication. The people behind it deserve nothing but respect, not necessarily because they dared to put a V8 into a Tesla, but for the fact that they managed to build something that many deemed impossible.

If you want to know more about how ICE-T was built, I strongly recommend watching the series of videos on Rich Rebuild’s channel. You can also watch an interview with him below, in a video posted on YouTube by Vibrance Performance TV. 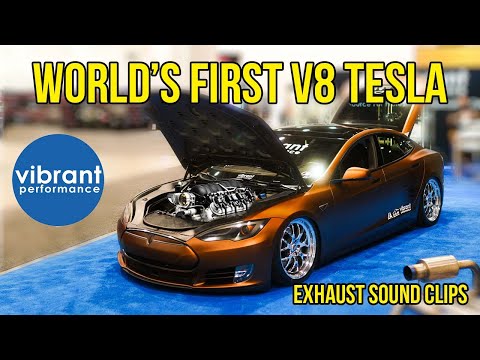