1 The Pros And Cons of the Dacia Spring, Europe's Cheapest EV

2 2021 Dacia Spring Electric Raises Great Expectations. How Is It, Really?

5 Dacia 1300 Gets Widebody and Shooting Brake Versions, Looks like a BMW
Car video reviews:
Up Next

One of the most affordable new electric vehicles, the Dacia Spring, was put through its paces in a couple of challenges against its 1300 ancestor. The two cars went head-to-head in a quarter-mile drag race, and then had their skills tested out on the track.
7 photos

Now, if you’re familiar with the specs of the Spring, then you know that it is incredibly slow. The electric motor produces a very modest 44 HP and 125 Nm (92 lb-ft) of torque. The Romanian automaker claims that it will take forever 19.1 seconds to accelerate to 100 kph (62 mph) from a standstill. The standing kilometer takes 40.5 seconds, and it is capable of going up to 125 kph (78 mph).

On paper, the 2021 Dacia Spring holds the upper ground in terms of torque, but loses in the weight department to the ancient model, which is in dire need of a refresh. This means that it literally could be anyone’s game down the quarter mile, ultimately coming down to the skills of the two drivers.

The same can be said about the (very slow) track test that followed the straight-line acceleration challenge. Both of them were hosted on the outskirts of Romania’s capital city, Bucharest, sometime in May.

Oh, and the video is in Romanian, but you can still enjoy it if you want to see which of the two turned out to be quicker. So, without further ado, let’s move on to the clip. 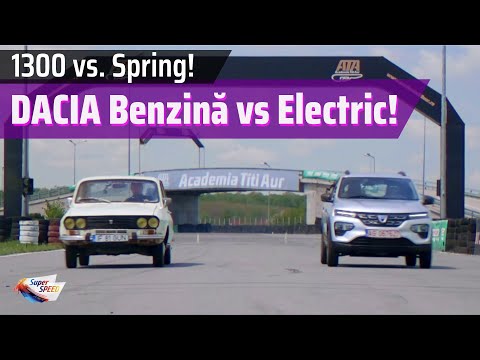