The Romanian car-maker Dacia had a big success with its range of crossovers, named Stepway.

It was introduced on the small hatchback Sandero and it evolved across its entire range. Even for sedans.

The MCV Stepway featured a higher ground clearance than the regular MCV. It was meant to be used on unpaved roads. The black plastic overfenders mimicked the styling of an SUV, even though the car was just a station-wagon.

The Stepway was the ultimate trim level for the MCV and it was fitted as standard with a new MediaNav infotainment system, parking sensors, and Hill Start Assist. Man-made leather upholstery was on the options list. Strangely, the car-maker announced that the horn was placed on the steering wheel. The car featured seating for three in the back and, due to its longer roofline, it offered good headroom. The legroom was limited due to its moderate wheelbase.

Under the hood, the MCV Stepway was offered with a choice of diesel and gasoline engine mated as standard to a 5-speed manual. An option for a robotized (Single-clutch) gearbox was available for specific engines. 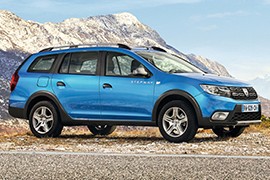