We love seeing a good old-fashioned fair fight every now and then, which technically, this is. Neither car features any performance-enhancing modifications, which tends to add a certain type of relevance to your average straight-line battle.
6 photos

Believe it or not, despite their differences, this race was relatively close, at least for a little while. Once both drivers reached higher gears, the Hellcat’s superior pulling power came into play, and the rest is history. Anyway, here’s what you need to know about how these cars match up with one another.

This Dodge Challenger Hellcat is a widebody variant, which means it comes with flared fenders, different wheels, three-mode Bilstein adaptive damping suspension, six-piston calipers with 15.4 inch vented and slotted rotors at the front, plus stiffened anti-roll bars. To be fair, those mods aren't going to do much in terms of power delivery, and it’s not like the Challenger wasn’t already a very heavy car to begin with, at roughly 4,400 lbs (2,000 kg).

The sixth-generation Camaro LT1 is lighter on its feet, tipping the scales at just 3,685 lbs (1,671 kg) according to Chevrolet—these numbers are for the six-speed manual coupe model, like the one in this video.

On paper, this looks like a huge mismatch. However, weight is a very important factor, and if you’re just looking at the math of it all, that Challenger is basically a Camaro with an extra four people on board, driver excluded.

These two cars were reasonably close over a short distance, and driver skill does matter when you haven’t got an automatic transmission. Once they got up to speed, though, the Hellcat simply did what it does best. 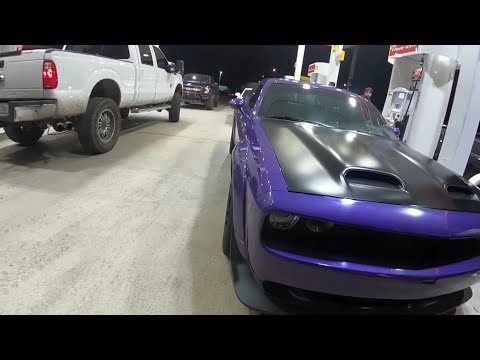