Aptera Motors is eyeing a comeback for 2021, if “comeback” is the most appropriate term here, considering it never fully arrived. The solar-powered electric vehicle (sEV) Aptera will go into production this year, for a delivery that is yet to get an official date.
9 photos

Reservations for the sEV opened last December, and response has been overwhelming. Whatever difficulties Aptera encountered in the late 2000s seem a matter of the past now: everyone wants one such three-wheeler that can do daily commutes powered by the sun, with the promise of incredible comfort and unparalleled performance.

In case you’re one of the thousands to place a reservation on an Aptera or were simply wondering how things have been going, here’s an update from co-CEO Chris Anthony. An Aptera Alpha recently went testing at the Barona Drag Strips outside San Diego, California, and everything went off without a glitch.

Even without a sway bar and suspension tuning, the Alpha was put through its paces for speed, braking and performance under intense stress. It even took part in a bit of racing against a Chevrolet Bolt, did moose testing, hard braking and hard acceleration tests.

Anthony says that, even at this stage, the three-wheeler is incredibly stable and reliable. Aptera Motors hopes to take the project into Beta stage soon, including fine-tuning of the Elaphe motors, Aptera’s “own battery technologies,” and many other upgrades.

The Aptera sEV is being marketed as the world’s first never charge vehicle, capable of a record-setting range of 1,000+ miles (1,609+ km), in territories where sun exposure is optimal. The three-wheeler will get a 46-mile (74-km) daily range from the roof-mounted solar panels, but the company will offer a bigger battery pack for those who tend to drive more on the daily and need charging from an outlet. Aptera says several options will be available here, along with other customizations.

The body of the Aptera is made of carbon fiber, kevlar and hemp, which means it’s lightweight but tough, and large enough to accommodate two passengers and a proper trunk for carrying luggage. This gives Aptera the confidence to declare that, while legally not a car, this sEV is just as comfortable as one but better because it gets all its power from the sun. 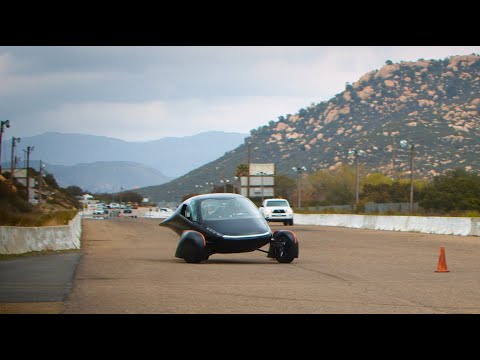